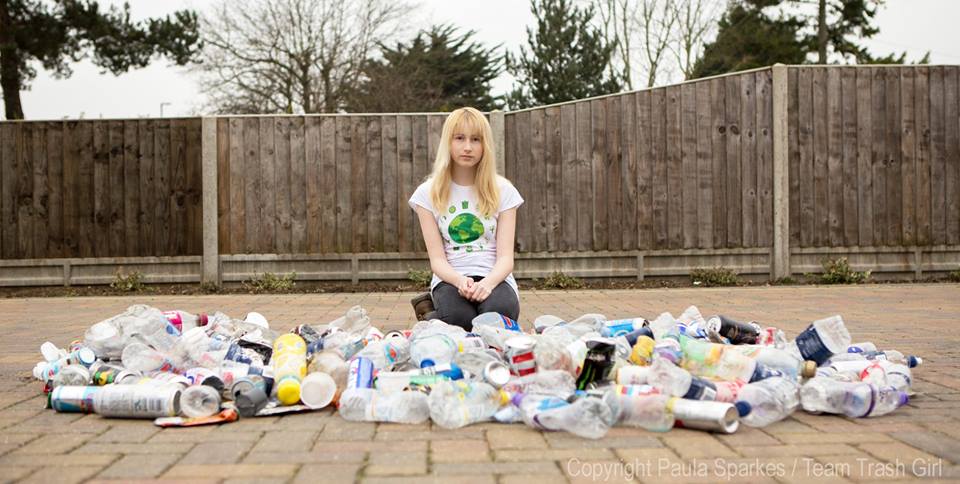 A young girl rolls down the street on her bike. It’s the type of bike equipped with a big basket on the front. As you pass her, you notice it’s overflowing — with what seems to be garbage. When you look more closely, you see it’s recyclables she’s plucked from the side of the road.

Take yourself back to high school: How would you react? If you’re like some local bullies at Hellesdon High School, you might ridicule her. But bullies aren’t powerful enough to stop Nadia Sparks.

A Movement Led by a Tween

For young Sparks — a 12-year-old student at Hellesdon High School — the decision to act against litter was a natural one. After all, she grew up watching her grandfather and mother comb the beach for refuse in Mundesley and take it home to dispose of properly. The values they instilled in her led Sparks to strike out on her own as an eco-warrior. She decided to do something simple: Pick up litter along the two-mile stretch of road she took to and from school every day on her bike.

Sparks has only been grabbing pieces of recycling and trash since September, but already she’s gathered enough plastic to fill two large recycling containers. Why? She says of saving the environment: “It’s everyone’s job. We are all responsible for keeping this world safe, instead of believing that it’s always someone else’s job.” So she’s taking the first step by gathering rubbish on the side of the road. You’d think anyone else who inhabits the earth would offer their wholehearted support, right?

It wasn’t long before other local schoolkids caught wind of what their classmate was up to, and their reaction was surprisingly cruel. Instead of praising her efforts, they mocked the fact that she stooped so low as to pick up others’ trash. They started calling her “Trash Girl” and would even toss things on the ground, informing her that it was “her job” to pick them up.

The effects of bullying can be long-lasting and very damaging, especially to a young person. Bullying is no joking matter — it can traumatize a victim in the form of years of lowered self-esteem, mental health issues and a generally negative concept of oneself. Many kids would back down in the face of this kind of adversity, and who could blame them if they did? Bullying is still an ongoing and serious issue in our schools.

Sparks, however, took what was an unfortunate situation and transformed it into something for good. Her mother laid out her options, saying, “I told her she had two choices: She could either stop collecting rubbish, stop drawing their attention and hopefully they would leave her alone. Or she could own ‘Trash Girl.’” Sparks decided to do the latter.

She launched a Facebook page called “Team Trash Girl.” Here, the online community has rallied around her, offering words of support and cheering her on as she continues to do good even in the face of adversity. According to her, “I’m not going to stop doing the right thing because of them, and if they are going to call me ‘Trash Girl,’ they can say it with respect.”

Sparks’ online fans certainly utter the name with reverence. They range from a grateful fisherman, who says his livelihood depends on a clean environment where aquatic life can thrive, to fellow environmental enthusiasts. Sparks has even inspired her followers to take on their own eco-friendly projects. They fill the Facebook page with photos of themselves picking up recycling and trash along their own local roads. Sparks has challenged them to start small, grabbing just three pieces of trash each day.

The Wide-Ranging Reach of One Simple Act

The small, simple approach this pre-teen took toward changing the world for the better should serve as an inspiration for everyone. Every eco-friendly act, no matter how small, can have a great impact on the earth — even if it’s just grabbing three pieces of trash from the grass today.

Everyone can do their part to make the world a healthier place. So what are you waiting for? Join the movement to create a greener earth. Start by picking up just three pieces of trash today — you never know how big an impact this small act could have.