Military veterans suffering from post-traumatic stress disorder (PTSD) will have the chance to travel to South Africa and work with endangered wildlife as part of their therapy thanks to a grant from Lord Ashcroft KCMG PC.

UK-based charity Veterans for Wildlife (V4W) has secured funding from Lord Ashcroft for its innovative Footprints of Hope program, which will see veterans care for baby rhinos orphaned by poaching as part of a structured series of activities. 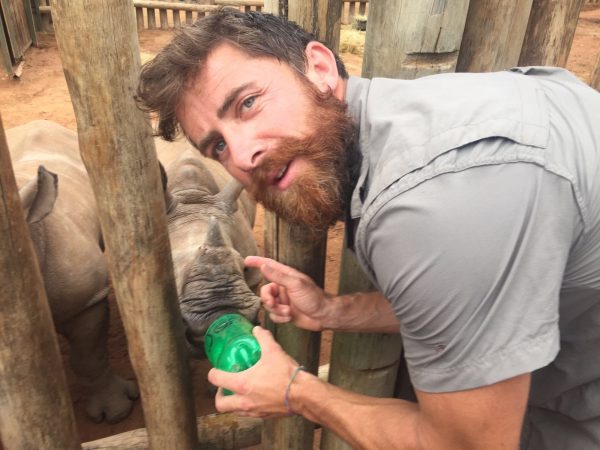 V4W CEO and former Royal Marine Wesley Thomson said Footprints of Hope was based on the proven concept of animal-assisted therapy (AAT), in which pets and other animals have been used to help people suffering from exposure to trauma.

“By putting the needs of animals, often in a worse position than the participants, first, veterans will be able to gain perspective on their own lives and to find a sense of purpose in caring for something other than themselves,” Mr Thomson said.

“In this respect the program will be similar to the life veterans knew in the military, where a high emphasis is placed on the ‘buddy’ system, where people are taught to look after each other.”

In the Footprints of Hope program the ‘buddies’ are juvenile rhinos whose mothers have been slaughtered by poachers. About a thousand rhinos are killed every year in South Africa to feed a market in south-east Asia where rhino horn is prized as a status symbol and for unfounded medicinal qualities.

Footprints of Hope will involve a wellness retreat conducted at the Care for Wild Rhino Sanctuary in South Africa.

Veterans deeply affected by their wartime experiences will undertake a novel combination of activities including art, yoga, and day-to-day hands-on care of orphaned rhinos.

Mr Thomson said veterans would learn how to understand their own trauma and to adjust to it through human-animal connection.

Lord Ashcroft is a key figure in the veterans community thanks to his work as the government’s special representative for veterans’ transition from military to civilian life. He is also a committed philanthropist.

Mr Thomson is urging veterans who have suffered as a result of their service to contact the organisation via their website if they are interested in applying to attend the Footprints of Hope program in South Africa.

V4W also pairs military veterans with conservation and anti-poaching programs in Africa in order to pass on the experience of former military personnel to those fighting to protect Africa’s rhinos, elephants and other endangered wildlife.