Tattoo Artist Covers-Up Reminders of a Troubled Past

Tattoo’s are often cathected with meaning, and can be a potentially permanent record of who you were at the time they were inked. 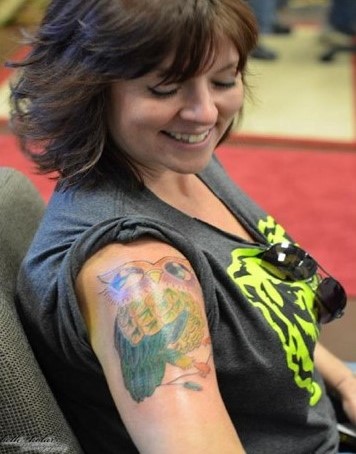 This can be a double-edged sword, as this can equally result in a tattoo being a dark and daily reminder of a troubled past. Chicage-based tattoo parlour INK 180 is dedicated to using it’s artistic talent to offer free cover-ups for ex-Gang members, ex-prisoners and victims of Human Trafficking, to help people move on and leave their pasts behind. Funded entirely by donations, INK 180 provides inking, supplies and artwork entirely free of charge to any victims who require assistance.

Lifelong artist and proprietor Chris Baker was inspired to offer the service after volunteering at a Young Group in the Chicago area. The kids and Chris had the idea of painting artistic murals over the walls of buildings defaced by gang graffiti. It was this that made Chris contemplate that the markings of gangs go well beyond graffiti on buildings, as gangs rely on body-altering tattoos to signify everything from allegiance, hierarchy and tallies of violent criminal activity. It was then he was inspired to offer a service to cover up the signs of such dark and destructive lifestyles with works of art.

Even when former gang members choose to rehabilitate themselves, obstacles often bar their way in their attempt to escape their past. Because of the prominence of their tattoos, former gang members can be prevented from attaining good job opportunities, are marked for scrutiny from law enforcement, and can even be targeted for reprisal, all due to their markings. Something as simple as a cover-up can go a long way to removing these obstacles, as well as helping ex-members put their past behind them.

But not all tattoos are inked voluntarily. After a meeting with the US Homeland Security’s gang division, Chris was introduced to another division upstairs, and the plight of people caught and enslaved by Human Trafficking. Victims are typically tattooed by their captors so that if they are ever found, they can be tracked back and returned to their ‘owners.’ In this way, regardless of their best intentions and efforts to leave their former life, victims are marked with a constant reminder of a past they may feel they can never leave. INK 180 allows these victims some comfort from the painful reminder of their ordeal and creates a fresh, uplifting artwork in it’s place. Chris is now also looking to extend his service to assist victims of domestic violence:

“When you have some guy’s name on you, and he was horrifically abusive, it’s just a constant slap in the face every time you see that tattoo,” Baker said.

As well as offering the tattoo cover-up service, INK 180 is a fully-functioning parlour, offering piercings and new tattoos, including custom and one off designs. The stated goal of INK 180 is to offer an opportunity for a real second chance, and from honing his artistic talent, Chris is able to turn the often crude and violent markings into images that can inspire and allow their recipients to forge a new life for themselves.