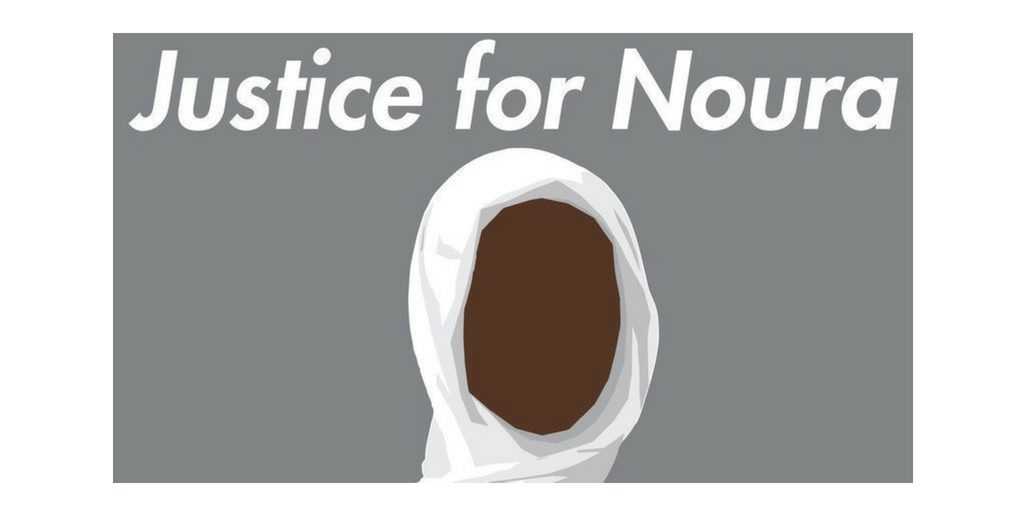 On May 10th 2018, Noura – now 19 – was given the death sentence by a Sudanese Court for killing a man she had been forced to marry after he raped her while his relatives held her down.

Noura’s case provoked outrage online, with people around the world sharing her story using the hashtag #JusticeForNoura to raise awareness.

A Change.org petition calling for the sentence to be dropped was signed by over 1.4 million people.

Equality Now, an international women’s rights organization, wrote a letter to Sudan’s President Bashir, which was co-signed by numerous human rights groups,to calling for Noura’s conviction to be overturned.

Sudan does not recognize marital rape, and Noura was convicted of first degree murder and sentenced to death after the family of her ‘husband’ rejected the option of financial compensation.

Noura’s lawyers filed a legal appeal against her conviction and death sentence on May 25th, and on the 26th June 2018 it was announced by the High Court in Um Durman that her death penalty decision has been quashed.

The court in Sudan has cancelled the decision of premeditated murder-resulting in death penalty and instead issued a decision convicting her of manslaughter/murder without intent. Noura has now been sentenced to five years inclusive of time already spent in jail.

Noura was forced to go through with the wedding ceremony in April 2017. She stabbed her husband shortly after that, and was arrested immediately as when she went to her family for help, they disowned her, and turned her into the police.

Noura is said to be elated by the news and there was spontaneous celebration in the prison upon the breaking of the news.

There has also been a wide, positive reaction on social media.

“We are very pleased that Noura has won the court appeal against her death sentence, and we celebrate it as a positive step for both her, and women and girls generally in Sudan,” said Equality Now’s human rights lawyer Judy Gitau, who has been leading on the campaign to bring justice for Noura. “However, sentencing her to five years in prison and a fine for defending herself against her rapist is still not acceptable and we are looking at next steps to support her.

“The progress in #justicefornoura case is rooted in the Noura’s hope, the dedication of her team and the solidarity of millions of activists around the world.

“This decision marks the beginning of the end of child marriage in Sudan. It signifies the day women and men of goodwill in Sudan said- enough to the raping and marrying off of children.

“This is a tremendous decision. It marks a departure from the days when everyone would watch quietly as women and girls are brutalised and criminalised  for speaking up about their rights. It says to the women and girls of Sudan- you are not alone.”