A nine-month-old English Springer Spaniel who found herself without a home has landed on her paws after being adopted by the police to be trained as a sniffer dog.

Ruby was being looked after by the team at Dogs Trust Manchester after a change in family circumstances meant she could no longer stay with her owner. Within days of her arriving, staff had recognised that she may have the potential to be a working dog – and hundreds of miles away so did police dog handler PC Mark West from Bedfordshire, Cambridgeshire and Hertfordshire Dog Unit.

“I saw her on the website and there was just something about her!” said Mark. “Even in the photograph she looked incredibly alert so I immediately called the team and when they spoke to me about her I was pretty confident that she was just what I, and the department, was looking for.” 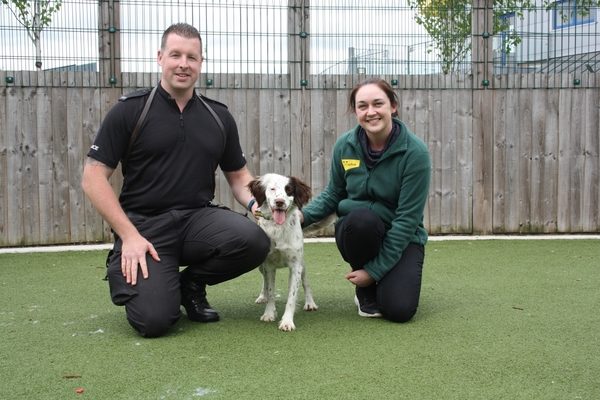 Detection dogs need to be toy-focused, love to play hide and seek games and must be confident around people. After travelling almost 200 miles from Luton, Mark knew she had fantastic potential within minutes of meeting Ruby as she immediately chased her beloved tennis ball and patiently searched for it wherever Mark hid it.

“She was fantastic,” said Mark. “Once that ball came out, that was it! That focus is exactly what we are looking for and she has continued to impress us now she has started her training. She is doing really well and it is looking like she will be fully qualified in September. She lives at home with me and when she has completed her training she will be my partner in fighting crime, searching for drugs, cash and firearms.”