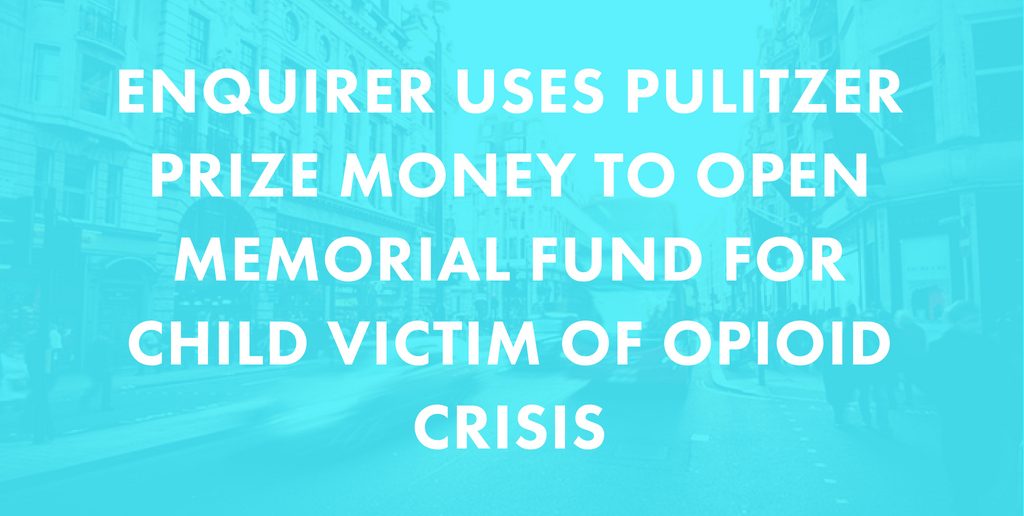 The Cincinnati Enquirer pledged $5000 to start a memorial fund for Elianna Russ. Russ is the infant child of Stephanie Gaffney, featured alongside her daughter in the award-winning piece “Seven Days of Heroin.” The article, which helped secure the paper’s 2018 Pulitzer, covers one of the most pressing issues threatening the American public: a new wave of heroin and synthetic alternatives that have ballooned addiction figures beyond past numbers.

The story was grimly underscored by Gaffney’s death — from a Fentanyl overdose — just ten days after the interview. Gaffney’s mother, Beth Arcail, now retains custody of the child with her husband.

While no region has gone untouched by the heroin epidemic, areas of the Midwest and American Heartland have been especially devastated. Seeking to document the epidemic in a gritty up-close expose, over 60 staff from the Enquirer worked on “Seven Days,” conducting interviews, capturing pictures, and carefully observing every aspect of opioid addiction in intimate detail. From a man just released from prison that morning to Gaffney’s struggles to provide for both her child and her addiction, the story paints a bleak picture for the city’s epidemic.

However, throughout the story, there is cause for hope. The timeline of the piece is split into hours, providing a small snapshot of lives affected in each period. At 7pm, a rehabilitation meeting concludes with a woman who has been clean for three years following the birth of her daughter. She now works two jobs and rents an apartment in town. For some of the other members of the meeting this feels far-fetched, as they struggle to clear three weeks without heroin. However, the trials of rehabilitation are helped by a network of programs and support groups, and coming clean is a distant, but distinct possibility for many.

On May 30, members of the paper attended Columbia University to receive their award. The prize, which is the highest honor available to local reporting, comes with $15,000 in prize money. Cheers echoed through the offices as news of the win reached everyone, and the mood throughout the paper remained ecstatic.

However, the grim subject matter of the piece underlines the importance of a Pulitzer exposure for the paper.

“My hope is that the Pulitzer recognition, so richly deserved, exposes even more people to the project, because the events chronicled in Seven Days of Heroin continue, and people remain desperate for help,” said Enquirer Editor Beryl Love.

While one-third of the prize money will be transferred directly into a memorial find for Elliana Russ, the remaining $10,000 will be used for further reporting on addiction-related material and staff development to that end. Heroin addiction now claims more lives than gun homicides and the ability to continue reporting on the epidemic as it expands throughout the states is integral to mobilizing those able to help, many at the paper believe.

Contributors can donate to the memorial fund through any Fifth Third Bank.