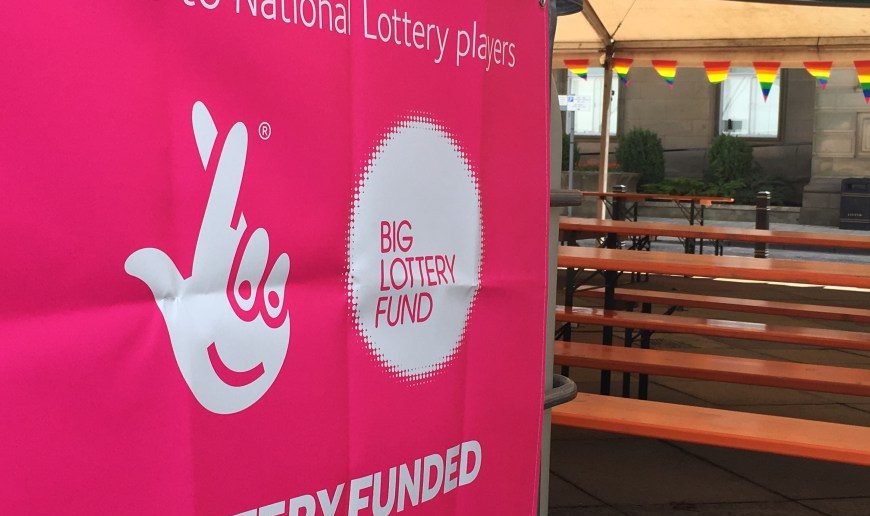 How the National Lottery Supports Communities Across the UK

You’d be forgiven for being a little jealous of all the people who have gotten lucky from the National Lottery. With just a £2 ticket and the luck of the world that day, people are boosted from being “one of us” to super-rich millionaires.

But the National Lottery doesn’t just benefit a few select ticket-holders. Did you know that 56p from every £2 ticket sale goes into a funding pot that benefits numerous projects, charities, and schools across the country?

Since 1994, The National Lottery has raised over £38 billion to help good causes all over the UK. To further support this, the Big Lottery Fund was set up in 2004, and has since raised more than £6 billion for over 130,000 projects in the UK.

In 2016-2017 alone, 9 million beneficiaries saw over 13,000 grants totalling £700 million heading their way. Around 10,000 of these recipients were charities, and £550 million went towards improving mental welfare support.

But which projects have benefited from this funding? We take a look at some of them below:

Delivering professional-level live music sessions to Welsh hospices, Music in Hospitals received funding from the National Lottery. The project provides a crucial distraction from any illness or medical care for both the patient and their family, friends and carers.

The Big Lottery Fund Wales Director, John Rose, reported that grants from £300 to £10,000 totalling over £30 million had been distributed to various places across Wales. One project that recently received such a grant was Welcome to Our Woods, who received £1,282 from Create Your Space. The community in Upper Rhondda Fawr, South Wales Valleys, is intent on making the woodland more useful and relevant to the region.

A club that was succeeding before it was even funded, The Knights Wheelchair Basketball Club in Antrim hoped to also cater to children who wanted to join in, but found itself unable to provide the service. Thanks to the grant it received, the club was able to buy specially adapted wheelchairs and set up a junior club.

This funding gives disabled children a chance to join a sports club. “I can see a difference in so many of the kids,” Club treasurer, Aubrey Bingham, said. “They’re so much more outgoing than when they started, and they have new skills. Their parents are so proud.”

To help improve health services and reduce isolation issues, a £1.3 million funding initiative was announced in January. More than £500,000 of this was to help people in County Armagh, with Community First Responders County Armagh & Tyrone, the Brain Injury Foundation in Camlough and Dialogue in Diversity, in Portadown, among those to reap the benefits.

Royal Blind received £45,000 in May thanks to help from the public. The charity revealed that its blind school in Morningside, Edinburgh, was one of three groups in the East of Scotland to receive the top level of funding in a share of £150,000. The money is to be used to buy specialist equipment for outdoor lessons as well as specialist playground equipment suitable for children with disabilities.

“We are absolutely over the moon to have secured the funding which will go towards enabling our pupils to learn and play outside,” said the deputy head of the school. “Too often children with a vision impairment are unable to access play areas in the same way as their sighted peers. They are not able to experience the freedom and exhilaration of outdoor play.

“With this funding we will be able to enhance Sensory Play, Active Play and outdoor learning through the creation of a kitchen garden. Pupils can help grow fruit and vegetable from seed to the kitchen.”

The North East was blessed with the grace of an angel in 1998, thanks to the Arts Council England funding the creation of the Angel of the North. Recently featuring in a photo shoot to celebrate 20 years of National Lottery funding, the 20-metres tall sculpture in Gateshead dominates the skyline and is seen by more than one person every second.

The landmark was forged from 200 tonnes of steel and its wings spread to a whopping 54 meters. Of his masterpiece, sculptor, Antony Gormley, told Lottery Good Causes, “The angel has three functions – firstly a historic one to remind us that below this site coal miners worked in the dark for 200 years, secondly to grasp hold of the future, expressing our transition from the industrial to the information age, and lastly to be a focus for our hopes and fears – a sculpture is an evolving thing.”

Thanks to funding from the National Lottery, the-now Sir Ben Ainslie was able to become Britain’s most successful ever Olympic sailor, winning four golds and one silver across five Olympic Games. The funding meant that Ben was able to train full time and receive the best medical care, coaching and facilities that are available. Seeing such a success from a local athlete often works as an incentive for others to push to be the best they can be, so while this funding was of great help to Ben, it may have help others from his area too as they followed his journey.

In May 2012, ahead of the Games in London, Ben was chosen to be the first bearer of the Olympic torch, before being the flag-bearer for the GB delegation at the Closing Ceremony. For London’s 2012 Olympic and Paralympic Games, an amazing £2.2 billion was invested by National Lottery players.

Dads and father figures were able to benefit from workshops run by the Dads Do It Too project, thanks to funding from the lottery. The project allows you to learn new skills together and enhance your father-child relationship.

Sports in Birmingham was bolstered by the lottery-funded Sport 4 Life group. The organisation works with ‘at risk’ children and young people as well as underprivileged families and adults from disadvantaged areas. It’s believed that sport can help improve the health, build key skills and raise their confidence while bringing communities together. The fund allowed them to include activities such as football, badminton and table tennis while also providing healthy eating courses and sports coaching.

Lottery funds helped support the success of the 2012 Olympics in London, but over 52,000 projects in the city have been the recipient of lottery-sourced money. In June this year, community groups in Newham received £250,000.

A project goal of turning the old North Woolwich Railway Line into a lush, 8,000-square-meters green space for the community to enjoy, The Green Station has been granted around £100,000 in lottery funding. It is estimated that the space will be used by 1,500 residents each year once it opens.

Projects such as IT sessions and English Language courses for women and schooling for disadvantaged children and young adults also received £10,000.