2016 saw the lowest level of rainfall in 140 years in Tamil Nadu, India. For the rural population of this southern Indian state, the resulting impact on their capacity to meet their basic water needs has been catastrophic.

Reports suggest that the knock-on impact of this drought has been an 80% water deficit for the region and a 42% decline in suitable cropping area. Local people are naturally concerned about their future.

Attempting to raise awareness around this impending crisis, local environmental campaigners have asserted that this drought is predominantly man-made, which has prompted further fears.

If this extreme drought is not simply a once in a 140-year occurrence, but rather a result of man-made climate change and regional environmental degradation, then similar events can be expected with increasing frequency and severity. The 2017 monsoon season, while more fruitful than the previous year, still saw below average rainfall.

As unfortunately seems to often be the case, it is the rural populations in Tamil Nadu, who contribute the least to global climate change, that must endure the brunt of its effects. The small village of Kanji, around 5 hours drive from the state capital of Chennai, is no exception.

For many of the local families the wells are running dry and the sustainability of their water supply is a long-term concern. Steps must be taken to ensure that local people know how to protect themselves against the drought and how to make the most of their limited resources.

This is a concern that St Anthony’s Matriculation School, an independent school that provides education for many of the poorest residents in Kanji, is taking very seriously. In an effort to educate their students about the importance of being environmentally conscious, the school has founded an Eco Club consisting of a group of 120 students and 10 staff members to lead the way in sustainability initiatives. 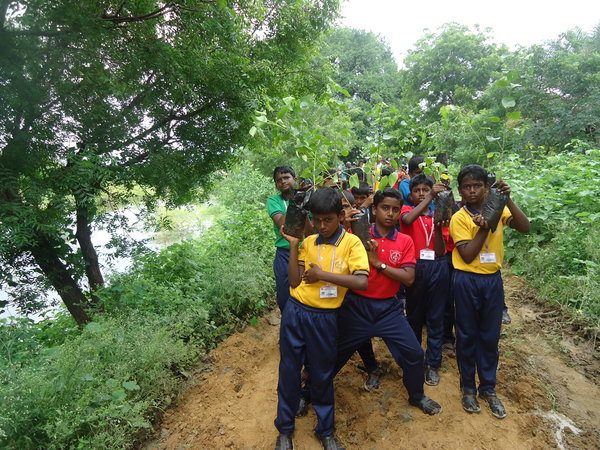 120 students are involved with The Eco Club

Despite only being created this year, the club has already run successful campaigns to limit the use of plastic bags and bottles within the school, and to encourage healthy eating practices through a vegetable patch grown on the school grounds. In addition to this, the club arranged a trip to visit a recycling plant to learn more about how to tackle the issue of excess waste.

Perhaps most impressive is the tree-planting efforts of the club, who have designated the first Saturday of every month as ‘Tree Planting Day’ and have succeeded so far in planting over 1,000 trees on school grounds and 600 in the surrounding villages. Trees provide a strong defence against drought and monsoon flooding by absorbing and storing water that may otherwise be lost as run-off, and improve local air quality.

Students are encouraged to take ownership of the trees, and tree planting in the villages was suggested as a way to encourage the students to teach their families and friends what they have been learning through the Eco Club.

The club’s future plans are to attend a two-day long eco camp to learn more about environmental conservation, and to organise regular speakers to visit and inspire the students.

Find out more about the Eco Club, including how you can get involved, by visiting their website.