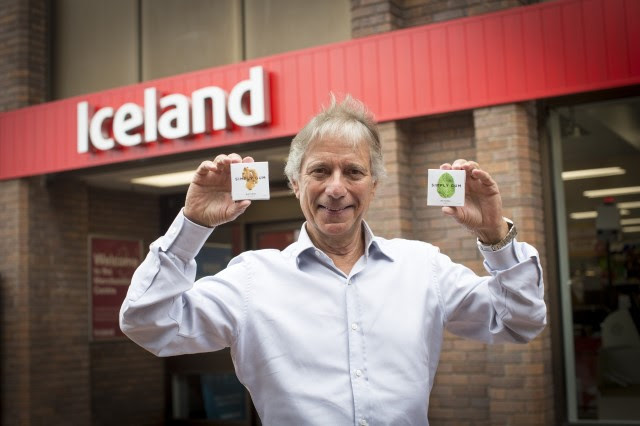 Local councils are believed to spend around £60 million a year removing gum from pavements up and down the country.

But with more than 100,000 tons of chewing gum consumed every year and an estimated 95 per cent of Britain’s streets stained with the sticky substance, they are facing a losing battle. Until now…

Iceland has become the first supermarket chain in the UK to sell plastic-free chewing gum. The new natural gum – Simply Gum – is completely biodegradable, making it better for the environment.

It is made from a tree sap called chicle which is extracted from the sapodilla tree, native to Central America.

The decision to stock the product forms part of the supermarket’s pledge to go ‘plastic-free’ on its own label products – something the chain aims to fulfil by the end of 2023.

Off the back of the announcement, Iceland commissioned research of 2,000 UK adults which found 80 per cent have no idea what ordinary chewing gum is made of.

And shockingly, 85 per cent were not aware it usually contains plastic.

“I absolutely detest the mess that discarded plastic chewing gum creates on our streets, and the fortune that is wasted by councils trying to clear it up,” said Sir Malcolm Walker, Iceland founder and executive chairman.

“For decades, regular gum makers have hidden their synthetic ingredients behind the catch-all term of ‘gum base’ which is consistently used as an ingredient on pack.

“Simply Gum uses the original, natural gum base of chicle and is fully biodegradable.

“We are delighted to make it available to UK consumers in our stores so that they can have a real choice about what they are consuming and the impact they make on the environment.”

Around 60 per cent of the UK use chewing gum and of those who do, around two thirds would prefer a gum which isn’t made from synthetic ingredients.

And more than three quarters of gum buyers said they will think twice about buying regular chewing gum again in the future.

The research also found nine in 10 are worried about the damage being done to the environment by plastic.

And three quarters said they have actively attempted to cut down of the amount of products containing or packaged in plastic they purchase.

“I created Simply Gum because I recognised a need for a natural gum that was made with high quality, sustainable ingredients,” said Caron Proschan. “We chose Iceland as our UK launch partner because of this shared commitment to quality and sustainability.

“Iceland continues to lead the way in terms of enabling consumers to make informed and responsible choices.

“We’re excited to introduce Simply Gum to the UK market and we hope that Iceland’s customers will be excited about trying a better chew.”

Simply Gum is now available in Iceland stores across the country and online – it costs £2 for a pack of 15 and comes in mint, maple and ginger flavours.