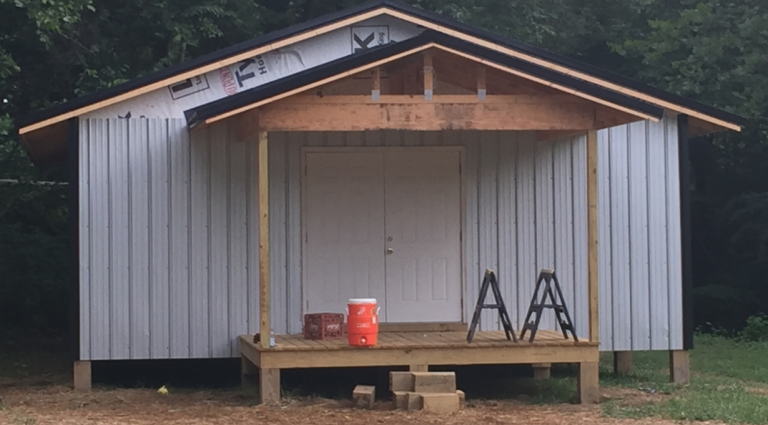 Addiction is at an all-time high in America, as is the number of people incarcerated for drug offenses. Upon recovery or release, these individuals face certain challenges avoiding returning to addiction.

Without a support system, trying not to fall back into the pit of addiction feels a lot like trying to get a grip on a slippery muddy slope for many recovering addicts. The complications faced in re-entering society become even more difficult when the recovering addict is also an ex-convict. Difficulties in finding employment lead many back into a life of addiction and crime out of desperation.

Pastor Grant Hasty of the Crossroads Community Baptist Church is trying to change all that by providing recovering addicts with a clean living arrangement.

Tiny Homes for Those Recovering

Without steady employment, many recovering addicts find themselves released from rehab or prison with few options for housing. Public housing, if available, often exposes those in recovery to many of the same influences and stresses that led to addiction in the first place. Many former addicts also find themselves estranged from any remaining family they may have, leaving the option of staying with them off the table as well.

Crossroads Community Baptist Church is located in McCreary County, Kentucky, a rural area where 32 percent of the population lives in poverty. The development of tiny homes is on the parish’s 13-acre parcel of land. Pastor Hasty hopes to build 20 tiny homes in this field to house recovering addicts.

According to the National Coalition for the Homeless, substance abuse plays a major role in homelessness among adults. However, often, addiction spirals even deeper among the homeless population. Maintaining a sense of community with other homeless peers is important for maintaining a modicum of safety on the streets, and many may feel pressured into substance abuse in order to be accepted by other homeless people around them. In addition, many homeless individuals turn to drugs or alcohol to help cope with the harsh realities of their existence.

However, addiction can make what is already a seemingly impossible task for many homeless people — finding a job and achieving sufficient financial security to afford housing — even more difficult. In addition, many addicts often turn to their drug of choice as a form of self-medication to deal with mental health issues that have been left untreated. Obviously, when living on the streets, finding food and a safe place to sleep takes priority over addressing mental health concerns.

Pastor Hasty hopes to address some of these issues by offering secure and safe drug-free housing to recovering addicts. While he has not yet commenced the selection process to determine who will be awarded housing, those who are helped will find they not only have a safe roof over their head, but also a clean society of peers to engage with and encourage each other. In addition, they will find the support they need to address some of their mental health concerns in a safe environment.

Other places of worship have joined in the movement to help recovering addicts. Church groups from neighboring states have sent volunteers to help Pastor Hasty with his tiny home project. In addition, a church group from Georgia is likewise taking the initiative to begin its own tiny home project.

There are other churches that have opened their doors to homeless people, allowing them a safe place to sleep, get cleaned up a bit and even participate in services. Building tiny homes provides one added benefit that sleeping in a pew can’t offer: the opportunity to have a place of one’s own, even if temporarily. This can instil a much-needed sense of pride in recovering addicts. Pastor Hasty’s church is truly helping some of the least fortunate among us with this initiative. And if other churches follow Pastor Hasty’s lead, countless recovering addicts will indeed have a new lease on life.