The annual National Lottery Awards are raising awareness about charity projects set up by those determined to bring some light and joy into the lives of people struggling with debilitating illnesses. 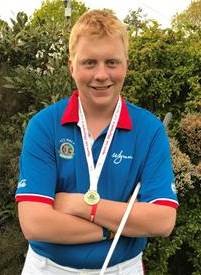 Warren has set up a charity to make golf more accessible

At just 17 years old, Warren Clark stands out as a youngster amongst the National Lottery Awards’ entrants, but he seems an unstoppable force when it comes to determination, ambition, and spreading his passion for golf. Despite suffering from autism, dyslexia, dyspraxia and a language impairment, Warren has been volunteering at golf clubs since the age of 11, and he has now taken his love of the sport a step further by setting up his own unique, National Lottery funded golfing charity.

Warren took the decision to apply for National Lottery funding so that his charity, Warren’s Golfing Dreams, would make golf accessible to people from all backgrounds. His charity offers free sessions for disabled and disadvantaged people, through families, community groups, and anyone who fancies having a go at a bit of putting.

Given that Warren is already an ambassador for England Golf, The Golf Foundation, and Think Autism, his love of the sport is sure to spread even further over the coming years. He dreams of one day becoming a PGA pro, and in April 2018 he passed his level one PGA coaching course. The success of his project is evident, since this year it was chosen as a finalist in the National Lottery Awards (the search to find the nation’s favourite lottery-funded projects).

Fiona Medley is another example of someone determined to overcome all physical obstacles and to bring enjoyment into the lives of others battling with serious illnesses. In April 2007, she had just accepted a job offer when she was diagnosed with breast cancer. She chose to keep working – and supporting her two teenagers – during the breaks between surgery and treatment, surviving on statutory sick pay during her extended periods off work. In the midst of this challenging time, the idea for Something To Look Forward To emerged.

Despite the subsequent and devastating revelation that her cancer was incurable, Fiona dedicated herself to giving back the ‘little luxuries’ in life that people suffering from serious illness’ often miss out on. Thanks to National Lottery funding, Something To Look Forward To enables cancer sufferers and their families to enjoy a range of free offers donated by companies, such as afternoon teas, hotel breaks, theatre trips, and spa days, allowing them to relax and forget their worries in an atmosphere that is a million miles away from that of a hospital waiting room. Fiona continues to cope well with her diagnosis, and this year her project was also chosen as a finalist in the National Lottery Awards.

National Lottery players have raised more than £38 billion for over 535,000 arts, education, environment, health, heritage, sport and voluntary projects across the UK since 1994. Click here to see the difference it’s making near you.

Georgia Kirby is a third year English Literature student at University College London. She has worked for HHB Literary Agency and interned at both Healthy Food Guide magazine and delicious. Magazine. For more of her writing, see her blog, www.theliteraryfoodie.com.