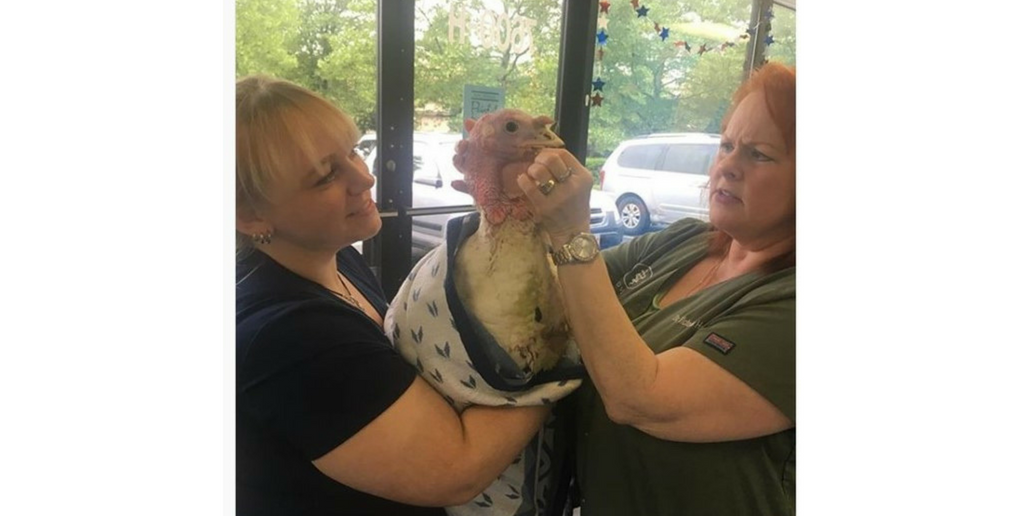 After falling from a truck headed to the slaughterhouse, Ivan the turkey waited, injured, by the side of a highway, until he received the help so many farm animals need. A kind citizen picked the little guy up off the side of the road and delivered him not to the slaughterhouse, but to Poplar Spring Sanctuary, a non-profit dedicated to caring for farm animals in need.

When Ivan reached the sanctuary, he was badly injured. He had a broken and infected wing as well as a fractured beak. The Poplar Spring staff took Ivan to an animal hospital where doctors treated his wounds, wired his jaw and amputated his wing, which was impossible to save. They estimated he waited for help for more than twenty-four hours.

Poplar Spring reported that Ivan seemed to feel much better after his visit to the hospital. They quickly accepted him onto the 400-acre sanctuary alongside their approximately 200 other rescues, including six other turkeys for Ivan to befriend. One turkey friend in particular, Madison, who was another rescued white turkey, quickly welcomed Ivan.

At Poplar Spring, Ivan joined other farm animals living the good life. These formerly abused and neglected creatures now enjoy the comfort that the sanctuary’s founders, Terry Cummings and Dave Hoeraf, generously provide. The two were inspired to open the sanctuary after getting to know the animals living on the land surrounding the farmhouse they had been renting. 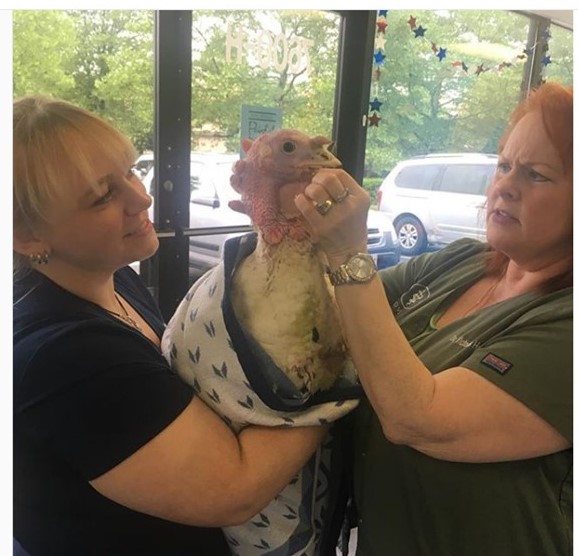 Cummings and Hoeraf realized their new animal friends were in danger of becoming their next meal, so they became determined to do something about it. They adopted a vegan diet, and in 1996, they opened the sanctuary. Instead of beef cattle, the land surrounding their home came to hold the farm animals they rescued, including goats, pigs, horses, sheep, cows, chickens and turkeys.

Today, the sanctuary and its volunteers, through support from donations, aim to care for the animals while educating the public and building empathy for farm animals. An honorable goal indeed!

Though Ivan found a safe home at Poplar Spring, he is one of few farm animals that have received support from animal sanctuaries. Unfortunately, many farm animals still live in harmful or cruel conditions, even though surveys consistently find that roughly 94 percent of Americans want compassionate treatment of farm animals.

Poplar Spring is just one of the sanctuaries around the country working to make sure farm animals live comfortable lives. But to continue their work, they need a lot more support from other compassionate individuals.

Organizations supporting farm animals receive only 0.8 percent of donations to animal charities. Donations tend to go to organizations supporting more well-loved domesticated animals like cats and dogs, while farm animals are often overlooked. Poplar Springs is on a mission to change that, and now that Ivan has healed, the friendly rescue turkey acts as a public ambassador on tours of the sanctuary.

With help from the animals, the people at Poplar Spring are working to educate the public on issues relating to farm animals and other wildlife in hopes of building support for their cause. You can book tours to meet the animals and even attend the sanctuary’s annual “Thanksgiving with Turkeys” event, a vegan Thanksgivingdinner shared with the turkeys themselves.

Poplar Springs sets a great example for charitable support of farm animals. Other sanctuaries across the nation provide similar aid. Visiting and donating to local farm animal rescues is a great way to make sure that hopeful stories like this one continue to brighten our lives.