By Nisha Kotecha on August 31, 2018 0 Comments
Eight-year-old Lily, who stars in Episode Two of Paul O’Grady’s Little Heroes, is treated at GOSH for a type of cancer called acute myeloid leukaemia.

As the NHS marks its 70th anniversary Paul O’Grady’s Little Heroes will provide a unique insight in to one of the world’s leading children’s hospitals, and the lives of the brave and resilient children who are treated there every day. Viewers will also have the opportunity to get to know the dedicated staff who care for and treat children who have some of the most serious and complex conditions

In episode one of the ITV programme, we get to meet Emily, 8, and her little brother Luke, 5, who were both born with cystic fibrosis – a life-long genetic condition where their bodies overproduce mucus that fills up their lungs and causes complications in other organs.

Emily and Luke have to keep a strict maintenance routine to keep their lungs healthy. Along with lots of medications, Luke and Emily have to do chest physio twice a day, exercise regularly and eat specific foods to make sure they put on weight.

Their physio can be monotonous, but their mum and dad try to make life with cystic fibrosis as fun as it can be. They get them to jump outside, use fun balls, play games, and get involved in social activities that are good for their health, like football and gymnastics.

During the first episode, Paul sees them taking part in their gymnastics competition and doing physio at home. He also sees what all Luke and Emily’s hard work means for their lungs, as he joins them for their lung function test on Walrus Ward. 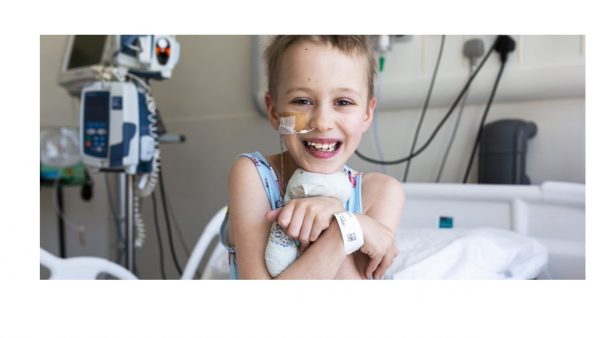 In episode two we meet eight year old Lily, who has treatment at GOSH for a type of cancer called Acute Myeloid Leukaemia. She stays on Elephant and Giraffe wards, where her treatment includes chemotherapy.

Lily’s diagnosis was a complete shock to her family, but the hospital’s play team and the oncology nurses gave Lily and her parents lots of support, and helped Lily get used to the needles, dressing changes and other procedures that were a part of her treatment.

During the second episode, Lily has an extra special visit from actor James McAvoy during his tour of the hospital. Lily loves to keep active, so she shows Paul how fast she can scoot on her scooter and puts him through his paces too.  She also shows Paul her ‘beads of courage’ – one for each part of her treatment.  Ward sister Helen, who introduced Paul to GOSH in episode one, helped to look after Lily during her time on Elephant ward.

Hear the inspiring stories of the patients, their families and the staff and volunteers at GOSH by watching the ITV series, which is on every Wednesday evening at 8pm until the middle of September.