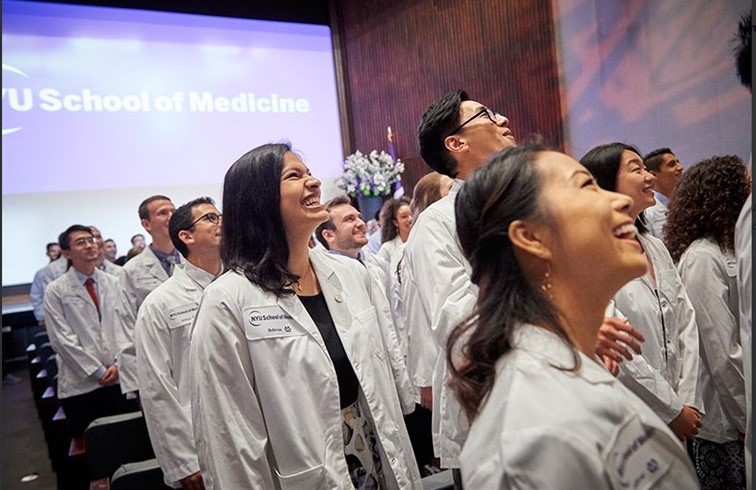 In what was already a rather momentous occasion, New York University Medical School managed to host what is probably one of the most surprising White Coat Ceremony in the history of the university. As hundreds of students and their families attended the ceremony where they receive their first white lab coat to mark the beginning of their studies to become doctors, it was announced that they would not just be receiving a lab coat, but also free tuition for their entire medical degree.

The new scholarship covers annual tuition costs that can amount up to $55,000 (£43,000) for all students, placing no limitations on academic qualifications or financial obligations. The scholarship does not just cover those newly attending students who were at the White Coat Ceremony either – it will apply to all those currently studying at NYU Medical School. It’s a move that will not only impact hundreds of current students lives, but also those who had dreamed of attending medical school but were deterred due to the inevitable financial costs from doing so.

Affordability is real issue for most Americans wanting to attend college, particularly graduate schools, in the United States, as tuition and living costs tend to be high. This is no exception for those wanting to pursue medicine and often puts off those who would go onto be incredible doctors from undertaking medical studies. Once graduated, issues of affordability can often deter newly qualified doctors from seeking employment in the specialisations that are not as lucrative, such as family medicine and paediatrics. This has led to cry out for more doctors in these areas, which primarily affect young people’s health, and action to be taken to combat this shortage. NYU Medical School is up to the challenge.

NYU is the only top ranked medical school in the United States to offer full-tuition scholarships to all students. Although other universities and colleges offer scholarships and bursaries based upon academic prowess or low income necessity, and are rightly commended for doing so, NYU has taken this a step further. They have made the point that medical schools have a obligation to ensure that they are training the nation’s future doctors free from the financial strain of tuition fees. This is to ensure that everyone who has the desire and the aptitude to become a doctor and care for the nation’s sick will have a chance to at NYU.

“This decision recognizes a moral imperative that must be addressed, as institutions place an increasing debt burden on young people who aspire to become physicians. A population as diverse as ours is best served by doctors from all walks of life, we believe, and aspiring physicians and surgeons should not be prevented from pursuing a career in medicine because of the prospect of overwhelming financial debt.” – Dr. Robert Grossman, dean of NYU School of Medicine.

More than 2,500 supporters have helped make the scholarship possible, and NYU Medical School has sent out its heartfelt thanks to all those who contributed. The scholarship was passionately pioneered by Kenneth Langone, who said: “The day they [the students]get their diploma, they walk out of here, unencumbered, looking at a future where they can do what their passion tells them, which is to help people live better-quality lives.”

Congratulations to incoming student Arianna on receiving her #WhiteCoat! Watch her reaction as she learns that we will be offering full-tuition scholarships to all current and future students in the MD degree program pic.twitter.com/wi5r60LfTl

It’s a bold step for a university to take alone, and could not have been done without the support and passion of thousands of supporters and their belief in NYU’s future doctors. Driven from a place of moral obligation and belief in students, present and future, it is set to have an impact on hundreds of student’s, and their families, lives, whilst also triggering a conversation about education and what further steps can be made in the future.