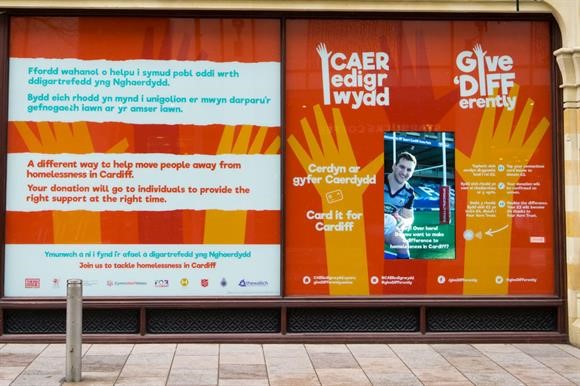 With the advent and rise in use of contactless cards, cryptocurrency and digital purchases, there has been a marked decline in the use of actual cash on the High Street. This lack of cash and coins has had a knock-on effect on charities across the country who once depended on small denominations of cash for donations via charity collections points in stores. In Cardiff, an interesting solution has been found to bring the act of charitable donation into the 21st century.

The new scheme uses a new, interactive screen (currently featuring the Welsh international rugby player Sam Warburton) where passers-by can donate with a tap of their bank card. The installation is placed on The Hayes, a key thoroughfare through the city’s busiest shopping district. The screen, as well as the technology behind it, allows donations to be made at the window 24 hours a day. The scheme was created by local Cardiff charity Give DIFFerently, funded through FOR Cardiff. The stated aim of Give DIFFerently is to ‘encourage people visiting and living in Cardiff to think differently about how they give to those who are begging and are homeless or at risk of homelessness’.

The transaction involves a fixed fee of £2 that is to be put towards small grants for those who are currently experiencing, or are at risk of, homelessness. The grants are to be distributed through the city’s front-line services and donations. There is also a donation-matching scheme by Four Acre Trust to double contributions made.

“According to recent articles it is expected that in the next 8 to 10 years it will account for only 21 per cent of purchases,” said Adrian Field, executive director of FOR Cardiff, “This is why we have been working with the front-line services tackling street homelessness across the city to think about how we move with the trend and make sure the generous people of Cardiff can give to the people they see on the streets, even if they’re not carrying cash.”

According to studies by the Charities Aid Foundation, the loose change in peoples’ pockets can account for up to £320m of the donations made to charities every year. In addition to helping charities get around the fact that shoppers are carrying less of this loose cash, the interactive screen scheme also creates an interesting way of raising awareness for the charity that could easily be scaled up to towns and cities across the country.