Hendricks likes to relax whilst Alice and Chris navigate the waterwarys.
Amazing Animals

It’s All Paws on Deck for Rescue Dog Who is Loving His New, Unusual Home

By Nisha Kotecha on October 15, 2018 0 Comments
Hendricks likes to relax whilst Alice and Chris navigate the waterwarys.

When rescue dog Hendricks was dreaming of his forever home, he might not have imagined that it would be a narrowboat! 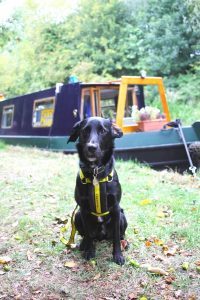 Hendricks loves going on adventures with Alice and Chris

But that’s exactly what it was and thanks to his ‘first mates’ Alice Yeates and Chris Webb, who fell in love with the 18-month-old Spaniel Cross when they met him at Dogs Trust Shrewsbury, he is now thoroughly enjoying new adventures on the waterways of Shropshire and beyond.

Alice and Chris made the houseboat their full-time home a year ago, and realised that they had an ideal lifestyle for a dog.

“Living on a boat gives us the freedom to go wherever we need to for work and we realised it’s perfect for a dog,” said Alice. “Hendricks loves walking along the towpaths but even more than that he loves exploring new places. We move around a lot, heading off to somewhere different every week or so, so it’s never boring for him!”

Alice, who works as a designer, and signwriter and project manager Chris, fell in love with Hendricks when they met him at the rehoming centre in May. He had found himself without a home due to a change in his family’s circumstances and as soon as Alice and Chris saw him they both felt he would suit the boating life.

Since adopting him they have travelled around 200 miles, setting up temporary home in many different places including Nantwich to the north and Milton Keynes to the south. 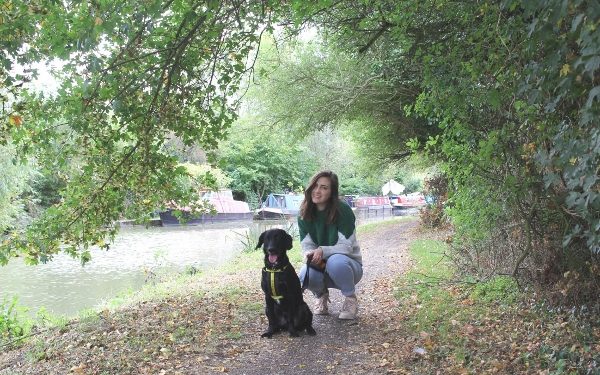 “At first so he could get used to the noise of the engine, I’d walk Hendricks alongside the boat but now he’s more than happy to sit back and relax inside whilst we do all the work! He usually stretches out on the sofa but gets himself in a position where he can still keep an eye on what we’re doing,” said Alice. “When he comes up on deck with us he likes to make sure he has a good viewing position which usually means putting his paws on my knees, much to the amusement of passing boaters and walkers!” 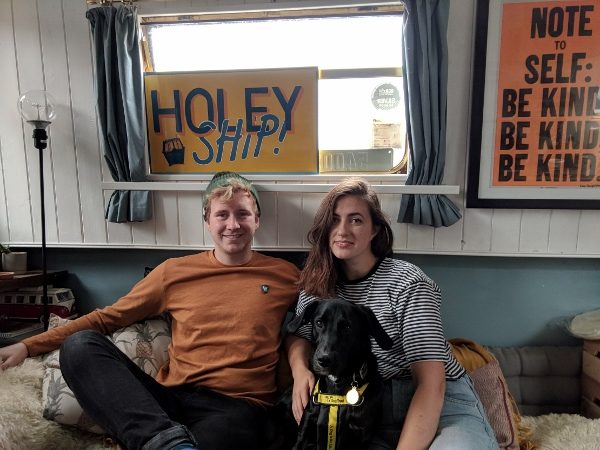 Alice and Chris are loving life on the water with Hendricks.

“It is quite unusual for us to rehome a dog to a boat but for a young dog like Hendricks who is inquisitive and loves to be out and about, it’s a perfect lifestyle for him,” said Louise Campbell, Manager at Dogs Trust Shrewsbury. “He is obviously loving life and we hope one day when they’re nearby they will spend a bit of time on dry land and come and see us!”