Meet Lizzie Carr. Four years ago, in a corporate job and newly diagnosed with thyroid cancer, she would not have imagined herself where she is now: a world record holder in paddle-boarding and environmental activist creating positive change in the world as her job. Though now recovered from her illness, it gave her a sense for what really mattered in her life and the courage to pursue that. She founded Plastic Patrol, a crowdsourcing not for profit organisation which records plastic pollution around the world. She also organises clean-up events in the UK and recently in the US, where her latest challenge: paddleboarding down the Hudson River in 8 days, took place.

Her first achievement was becoming the first person to paddleboard the length of the UK’s waterways. While training for this, she noticed “horrible sights such as a moorhen nest made of plastic”, which she said “opened her eyes to this huge problem”.  To her, paddleboarding is a relaxing sport which connects her to nature and improves her wellbeing. She wants everyone to be able to experience that without having to see pollution everywhere, which destroys nature’s beauty and restorative properties. She believes battling plastic pollution in waterways is the most effective way of tackling the much more publicised problem of ocean pollution. As she wrote on her blog, “80% of marine debris comes from inland sources”. This was the beginning of Plastic Patrol and a whole new life.

How to become a record holder in 3 years

Four years ago, she began a journey which led her to these achievements and to becoming so much happier. She started paddleboarding as a “low impact way of keeping fit” after her illness. She quickly fell in love with the sport, which helped her feel more connected to nature and she said, “Being on the water gives a whole new perspective”.

After quitting an unfulfilling job, she did a lot of paddleboarding, thinking of how to make her life more meaningful. She decided to do the Super SUP England in 2016, travelling along the waterways of the UK. It was then that she came up with the idea of Plastic Patrol and later organized clean up events in pollution hotspots she saw during her expedition. Her challenges only grew from there and, a year later, she paddleboarded across the English Channel, becoming the first woman to do so. This year, she continued her challenges to increase awareness of pollution and went to America. She has now also published her own book about paddleboarding and Plastic Patrol has since become a registered not for profit organisation. 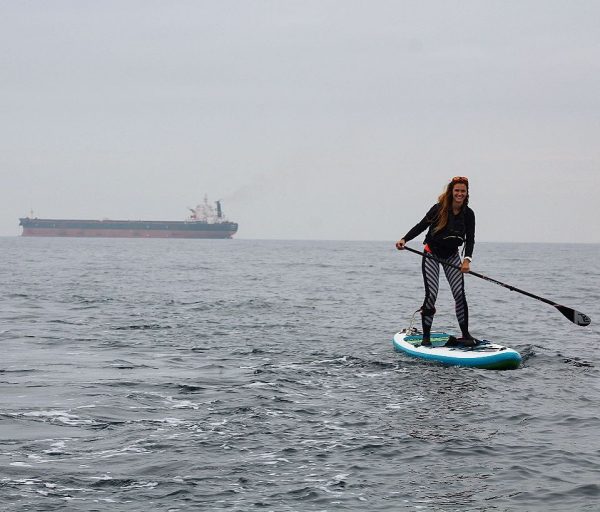 Though not a well known sport, “paddleboarding is certainly much more mainstream now” and it’s easier to get people involved. She certainly also contributed to the popularisation of the sport through her work.

Though her paddleboarding expeditions are simply great fun, they also provide useful contributions to science. When she started identifying the problem along Britain’s canals, she realised that not only did she need to record her sightings for proof and analysis but that it was so large scale a problem that she needed help in doing so. This is why she chose to crowdsource through her plastic recording app (Plastic Patrol) that anyone can use. Gathering this information helps to identify where the hotspots are, what type of rubbish is found and crowdsourcing it helps in lobbying and campaigning by raising awareness and having the support of the general public.

As she gains the interest of the public, she is also gaining more recognition in the scientific community. She has provided data for scientists during her expedition across the English Channel by gathering water samples for analysis for microplastics, and now, during her Hudson project, she partnered with institutions like The Hudson Park River Trust and used a modified paddleboard with pioneering technology allowing collection of even more data.

Though in Europe fighting plastic pollution has become a popular idea, especially after the broadcast of Blue Planet 2, and has even been incorporated into new laws, in America the situation still hasn’t changed much.  “It’s one of the world’s biggest consumers of single-use plastic with 80% discarded after just one use,” writes Lizzie. That’s why she decided to increase awareness of the problem in America by organising her newest challenge on the Hudson.

Though the expedition started with good conditions, the weather quickly changed for the worst, making for some very difficult paddleboarding. “Hurricane Florence was coming in on the East Coast” and she “was very exposed to the weather”, which she said was unpredictable and included a lot of rain and thunderstorms. Nonetheless, she persevered, telling her fans on Facebook: “In the true spirit of adventure I’m taking this challenge each day as it comes – and I will adapt to whatever the weather decides to throw at me next.” After 8 days, she finally found herself in front of the Statue of Liberty. When asked what her favourite part of the expedition was, she mentions this moment, saying it was coincidentally on the same day as she quit her job three years ago, which gave her a good chance to reflect on how her life has changed since then.

This was also the challenge with the most data gathering, as she made temperature and water motion measurements with sensors fitted to her smartfin, as well as collecting samples of the water for microplastics analysis. This will allow institutions like the Hudson River Park Trust to analyse the state of the river, which in turn provides proof for policy changes and action against pollution. Clean up events with a free paddleboarding session got locals involved in the project and provided concrete data on pollution.

“We’re evolving all the time”

Reaching America, where climate scepticism is high and single use plastics ubiquitous, is a big step for Plastic Patrol. So far, the app has collected over 50 000 examples of pollution across 20 countries and clean up events have gathered over 100 tonnes of waste. However, Lizzie thinks Plastic Patrol is still work in progress. They’re gathering more data to have a larger impact and are trying to encourage more people to get involved.

When speaking of the war against plastic as a whole, she thinks “huge milestones have already been met in the UK,” but there is a still lot more to work on and more plastic bans to push for, using the information she gathers.

When asked about what the future might hold, she says it’s hard to tell, as “we’re evolving all the time”. She doesn’t rule out the possibility of going to other countries on her mission but stresses there must be a good campaign-related reason to go there.

The power of the individual (that’s you!)

Though it was Lizzie’s life-threatening illness that gave her a sense of what really mattered and pushed her to pursue that, she would like all people to realise this without having to go through shock treatment. She felt she needed to jump into her dreams wholeheartedly, because living a mediocre life was not good enough. Though she did not know if she would succeed and nobody had done something like this before, she made it a reality. After standing in front of the Statue of Liberty, reflecting on her literal and metaphorical journey, she wrote: “Believe in the power of your dreams”. 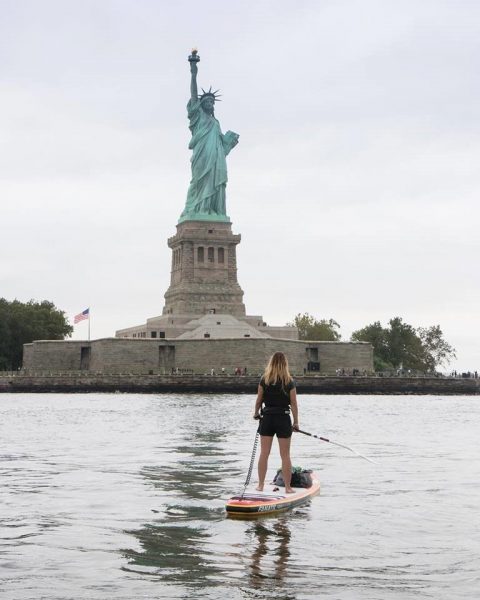 So far, Lizzie’s plastic recording app has collected over 50 000 examples of pollution across 20 countries and clean up events have gathered over 100 tonnes of waste. Photo: Lizzie Carr / Facebook

Plastic pollution is not only Lizzie’s challenge but also ours: in this global issue each of us needs to contribute to eradicate the problem. That’s why getting more people involved is one of the most important aspects of her work.

Hopefully her story inspires a more environmentally-conscious lifestyle in all of us and helps more people realise that life and time is precious and to decide to boldly follow their ambitions. Who knows where they may take us?

Download the Plastic Patrol app here and see the global map with all the trash found round the world.

Nicole is a student of Natural Sciences. An explorer and dreamer, she wants to brighten people’s days by reminding them of the good that happens around the world.