A national charity has combined its passion for theatre and baking through a ‘Great British Bake Off’ inspired craft session, which included making halloween costumes.

The crafts and costumes produced by staff at Shakespeare School’s Foundation are based on this year’s Channel 4 series, which ended on Tuesday night. Creations include a cardboard Mille Feuille, a chef with a giant paper croissant, a biscuit chandelier made from card, and a painted fox-themed cake, like that made by ‘Bake Off’ contestant Kim-Joy. 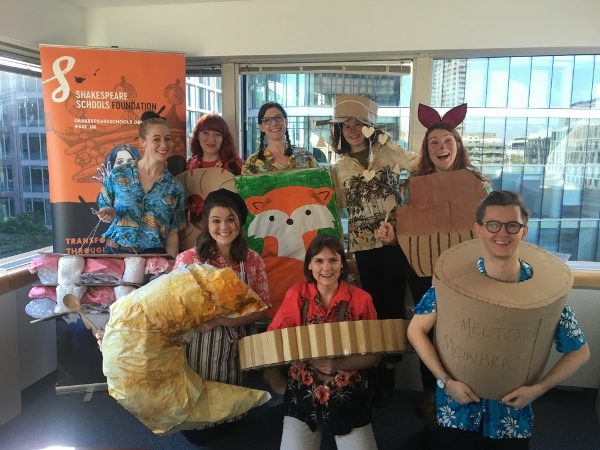 Shakespeare Schools Foundation runs Shakespeare Schools Festival – the world’s largest youth drama festival. The Charity shares the transformational power of the Bard’s work with up to 30,000 students from around 900 schools every autumn when those students perform in one of 128 professional theatres across the country.

The charity specifically targets schools in the most deprived areas of the UK and works with nearly 100 special schools every year.

“We’re passionate about creativity and theatre, and we’ve loved this year’s series of Bake Off, which was full of drama, laughter and tears,” said Georgie Brehaut, Events Manager at Shakespeare Schools Foundation. “Every year, Shakespeare Schools Foundation, works with hundreds of children across the county to develop their confidence, resilience and communication skills by understanding and performing the Bard’s great works.

“Like Shakespeare’s greatest characters, the Bake Off contestants have entertained us, captured our imaginations and inspired people to unlock their potential.”

Click here for more information about this year’s festival.