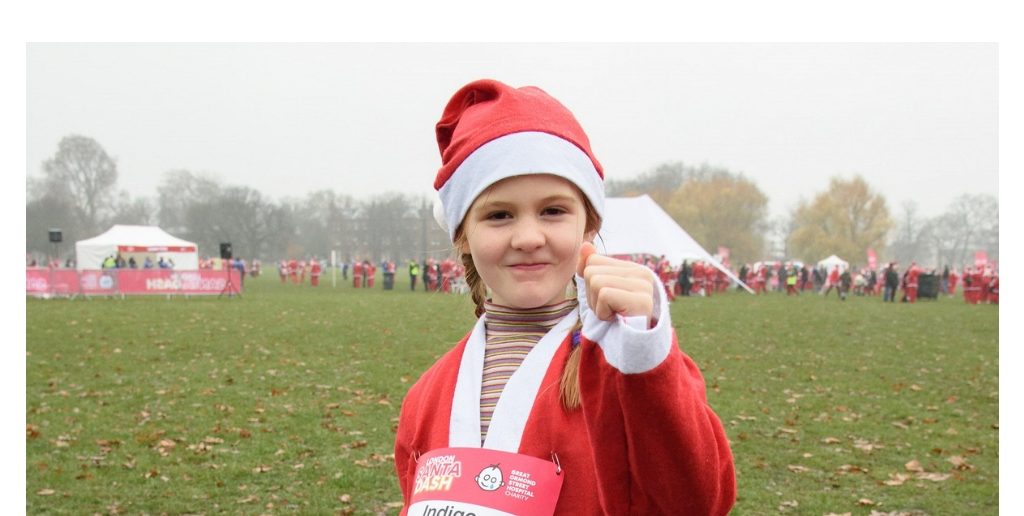 Just four years ago, Indigo, aged five was diagnosed with a brain tumour the size of a tennis ball and her prognosis was very poor. After tackling major surgeries, further brain injury and a long recovery with incredible determination and resilience, Indigo will be taking part in this year’s London Santa Dash to support Great Ormond Street Hospital (GOSH).

“The first thing we noticed was a really slight squint”, remembers Kirsty, Indigo’s mum. “It went away but then came back the next day and she didn’t feel very good. She had a temperature and felt quite hot but this isn’t too unusual. Our GP thought it was probably an ear infection and further tests were booked for the following week.”

The next day, Indigo and her parents saw some family friends who were also doctors. They checked Indigo’s eyes and insisted that the family shouldn’t wait and instead head straight to their local hospital. That night, Indigo had an MRI, was diagnosed with a brain tumour, and headed into her first urgent surgery.

Indigo’s first procedure was to place a shunt in her brain to relieve the severe build up of fluid that was making her very sick. After this initial surgery, Indigo’s family were told to take lots of photos and make the most of every hour with her.

Indigo’s family were living in Sri Lanka at the time of her diagnosis. Once the severity of her condition became clear, they were medically evacuated back to the UK and rushed straight to GOSH in an emergency ambulance. The journey took 20 hours in all.

“At that point we still didn’t know whether she was going to survive or whether there was any new treatment that could help her. But arriving at GOSH was like arriving at an oasis as suddenly it was all about the child. Before, she’d been in an adult neuro intensive care. They did the best they could and there were some fantastic doctors but it was very hard,” said mum Kirsty.

Upon arrival at GOSH, Indigo urgently needed at least two more surgeries and her team were working against the clock.

“They couldn’t wait to carry out the surgery over a few different days as they wanted, they were going to have to try and do everything on the same day, back-to-back.”

Indigo had an embolization in the morning followed by a tumour removal in the afternoon. Carried out by two different teams on two floors of the hospital over 24 hours, the teams successfully removed the tumour.

However, this was not the end of Indigo’s treatment. Due to the complexity of her surgery, Indigo suffered further brain injury which caused her to lose all mobility and sight.

After anxiously waiting to learn of Indigo’s tumour type prognosis, the family received the news that she had a very rare grade 1 tumour that would not need further treatment. They were elated – she was going to survive.

“I went from having a kid running around to being very sick and then having to start all over again, almost like a baby – although, of course, we didn’t care. We were ecstatic our girl was alive,” said Kirsty. 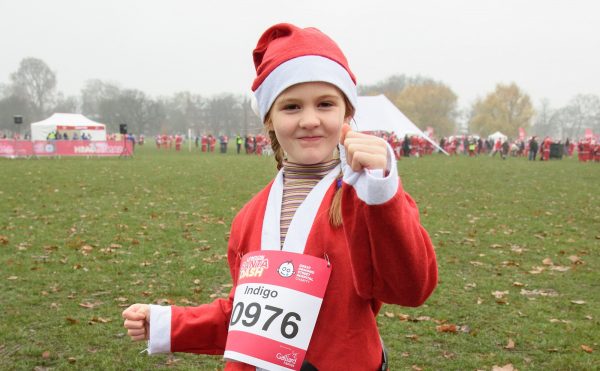 A few month later Indigo underwent further surgery to correct her vision. After two months of recovery, something remarkable happened.

“Her eyes started to look aligned. Somehow the eye surgery had reminded her young brain of what was possible and her brain cut new neural pathways, so her eyesight corrected itself. She is an absolute miracle and we are super super lucky,” remarked Kirsty.

Over the past four years, Indigo has exceeded all expectations – learning to sit, walk and run again. Indigo dances, does ballet, has learnt gymnastics and has now regained almost all of her sight.

“She showed herself to be the most tenacious, determined girl. If she wants to do something she will try and try and try. Even if she fails she doesn’t care, she’ll get up and try again.”

Inspired to support the hospital that saved her life, Indigo has encouraged her family to take part in the London Santa Dash for the second year in a row.

“Doing the Santa Dash run is an amazing culmination of her journey. It’s really nice that it’s come from her and all of us are taking part,” said Kirsty.