A Cure for Christmas: JAR’s battle against Juvenile Arthritis

When children are asked what they’d like for Christmas, most already have a list of goods handy.

Toy cars, tablets, dolls… all of these things crop up in their letters to Santa.

Trinity Beesley, age 6, only wants one thing for Christmas, and it’s in no way quantifiable:

“Dear Lord please make my arthritis go away. I know that you are helping daddy find a cure for juvenile arthritis. You know how painful it is. And nothing is impossible. God you can help me.”

Trinity lives in South East England with her parents, Richard and Rebecca, and her brothers – Joshua (14) and Daniel (12).

Trinity’s father, Richard Beesley, is the founder of Juvenile Arthritis Research (JAR), a foundation that has been working towards finding a cure for JIA for almost a year now. Richard also carries out the research on JIA, owing to his background in biomedical research.

“When my daughter Trinity was just two years old, she went from being an active toddler to suddenly being unable to walk at all. Her foot and ankle swelled up and she was in a huge amount of pain. After multiple visits to the GP and hospital, and following blood tests, x-rays, examinations and scans, they diagnosed her with Juvenile Idiopathic Arthritis (JIA). JIA is an autoimmune disorder that attacks the joints,” he said. 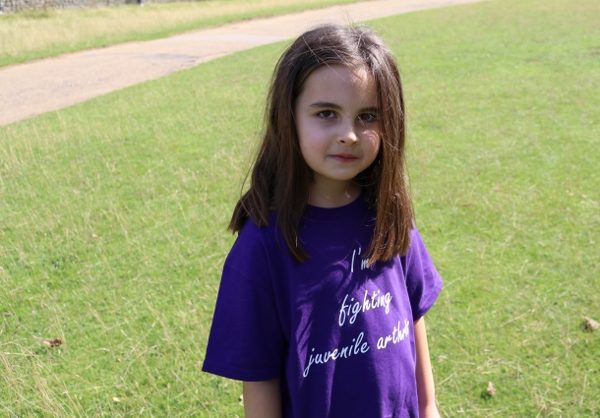 Trinity, 6, is hoping for a cure for juvenile arthritis, and her dad is doing everything he can to make her wish come true

Richard’s wife, Rebecca, was afflicted by the same condition but was only diagnosed when she was 10, and as she aged the problem didn’t so much disappear as ‘burn itself out.’

“[…] by then the damage had been done – the severe long-term inflammation had destroyed her left hip and she needed a hip replacement earlier this year as a result, having struggled on with the damage for 30 years.”

That’s why JAR was created; so children like Trinity don’t have to suffer the consequences of JIA for a lifetime.

“JAR has two aims: first, to find a cure for juvenile idiopathic arthritis, and secondly to increase awareness that children and young people get arthritis because better awareness leads to earlier diagnosis and that leads to better outcomes,” Richard stated.

He does not know of any other organisation with a purpose similar to his own, which further commends JAR’s inception, but also poses the question of a gap in research:

“The complication with our journey is that nobody has been down this road before so we do not know how long the road is, nor what exactly we will find on the way!”

Today, 1 in 1000 individuals under the age of 16 suffer from JIA. The drugs prescribed by clinicians, as well as the chemotherapy injections often administered, succeed in assuaging some of the pain by somewhat “reducing the immune system” so that it stops attacking the joints. But because there is still no cure, many people have to take these strong drugs for long periods of time, despite the side-effects and the complications that might ensue.

Though JAR is relatively new, it has already made progress in addressing this issue during the past year. In fact, Richard mentioned he would be discussing some of his findings with other prominent researchers in the coming weeks.

At a local level, the Beesley family has received lots of encouragement from their community:

“We have been extremely fortunate with the support we have received from friends, family and parents of children with JIA who have been proactive in helping to raise awareness and funds for JAR. For example, in October one of our friends ran a whopping 250 miles for JAR and raised over £1,000 in sponsorship. One of our neighbours is hosting a Christmas coffee morning in support of JAR and we’ve recently been nominated as Charity of the Year by a local school so we are looking forward to working with them closely this coming year. We are particularly interested in partnering with businesses, clubs and schools as that will really help spread the message about children with arthritis far and wide!”

To find out how you can help the Beesleys, as well as other families with young people suffering from JIA, visit their website.