Papillon with her mother Tortoiseshell shortly after she was born in the summer.
Transforming Lives

By Nisha Kotecha on December 10, 2018 0 Comments
Papillon with her mother Tortoiseshell shortly after she was born in the summer.

An adorable Shire foal has been taking her first tentative steps into the world at Redwings Horse Sanctuary one year after her mother’s rescue. 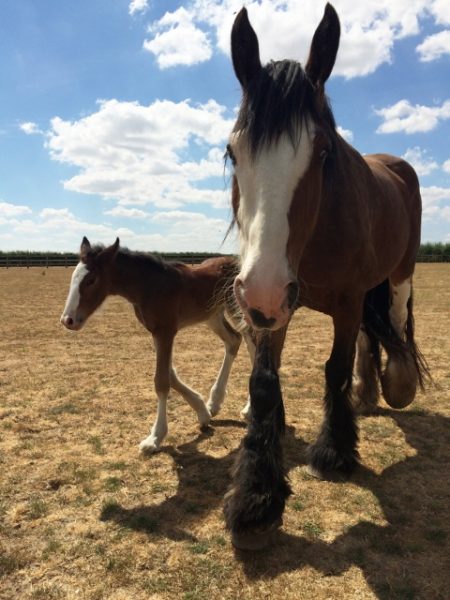 Papillon enjoys a stroll with her mother Tortoiseshell shortly after she was born in the summer.

Papillon, now five months old, was born to mother Tortoiseshell at the charity’s Norfolk headquarters, where she continues to grow in strength, curiosity and mischief every day.

Her arrival marks the end of a challenging but rewarding year for Redwings’ vet and equine care teams as they’ve fought to bring Tortoiseshell and her friends back to health following their rescue in November last year.

Tortoiseshell was part of a group of 19 Shire horses discovered fly-grazing (grazing without permission of the landowner) on a site in Bewdley, near Kidderminster in Worcestershire.

When no owner came forward to claim them, powers under the Control of Horses Act 2015 (England) meant ownership of the herd passed into the hands of the landowner, who asked Redwings for help.

With winter approaching, Redwings joined forces with the Blue Cross, Bransby Horses, HorseWorld, World Horse Welfare and the RSPCA to round-up the herd and find them new homes.

Redwings took in six mares and named them after butterflies – Tortoiseshell, Peacock, Cleopatra, Holly Blue, Painted Lady and Swallowtail. However, their recovery at the Sanctuary has not been plain sailing.

Blood tests and subsequent biopsies revealed that the group were suffering from significant and potentially life-threatening liver damage. While the cause was unknown, luckily they responded well to treatment.

Very sadly, however, Cleopatra passed away during the summer due to a severe and sudden bout of colic, and a second foal, named Empress, was heartbreakingly put to sleep due to complications arising from a blood infection. 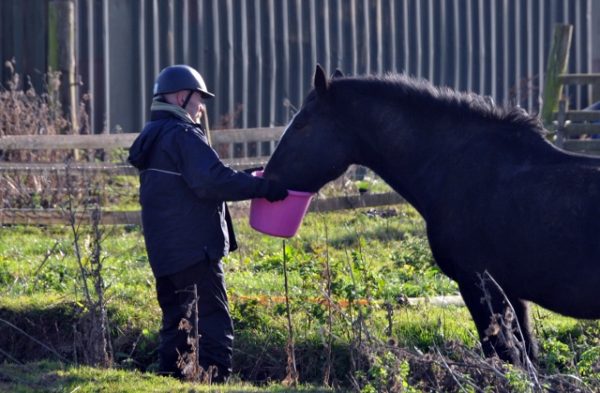 Concerns were raised for the welfare of the horses with the onset of winter. Pictured November 2017.

Papillon’s start to life was also fraught with difficulty; she was born with severely weak tendons in her legs which meant she initially struggled to stand, although happily her legs have strengthened and she now loves to trot around the paddock she shares with her mother. 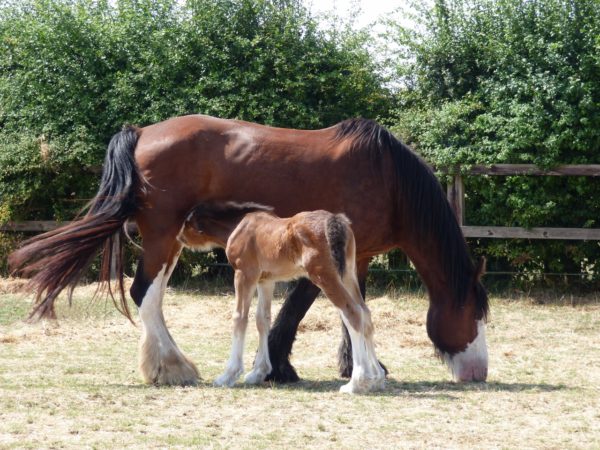 Papillon with her mother Tortoiseshell shortly after she was born in the summer.

“With little provision for their care, it’s safe to say that if we had not intervened by rounding-up this large group of Shires last November, their welfare would have been at dire risk – proven by the subsequent discovery of their liver problems,” said Lynn Cutress, Redwings’ Chief Executive.

“Handling such a number of heavy horses is a real challenge, but thanks to the efforts of our teams, these special Shires are now receiving all the care they need and they’ve already become beloved members of the Redwings family.

“We were truly heartbroken to lose Cleopatra and then little Empress, however seeing Papillon go from strength to strength has lifted our spirits. We’ve pledged her, and the rest of the Shire group, a safe home with us for life so we’ll be there for them every step along the way!”