A beautiful festive photograph featuring alpacas in a snowy Essex field has been turned into a Christmas card in aid of a national cancer charity.

The picture was taken by keen amateur photographer, John, 64, of Stock, Essex, who was diagnosed with pancreatic cancer in 2017. 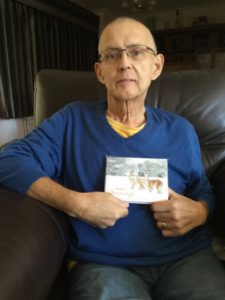 John is thrilled his photo has been commercially produced to raise money for the charity. Photo: Pancreatic Cancer Research Fund (PCRF)

“The three alpacas were pets of a lady in our village,” said John, who is currently undergoing chemotherapy. “I’d wanted to photograph them for ages but they were never in the same place at the same time! Then one year, we had lots of snow, and I went for a walk with my wife Joyce around the village with my camera as everything looked so beautiful.  We passed the alpaca field and there they were, for the first time ever – all three of them lined up perfectly. Talk about being in the right place at the right time!”

John selected three photos he’d taken locally to make into Christmas cards and sell to friends and family to raise money for Pancreatic Cancer Research Fund (PCRF). Of all photos, it was the alpacas in the snow that everyone particularly loved and orders rocketed. His house became a makeshift production line to cope with the demand – with his wife Joyce and Joyce’s 91-year-old mother pitching in to help too.

John’s homemade cards raised over £1200 and when the charity’s CEO Maggie Blanks heard about them, she asked permission to produce the alpaca card commercially for the charity’s 2018 Christmas card selection.

“To say I’m chuffed to bits to see the card commercially produced is definitely an understatement,” said John. “It looks superb and I’m proud that it’s continuing to raise funds for PCRF. Joyce has even bought some from the PCRF catalogue – I thought she’d be sick of that photo by now!”

John’s alpaca Christmas cards are on sale via Pancreatic Cancer Research Fund’s website and is one of the best sellers!