A pet ‘could be key to tackling loneliness’

Welcoming a pet into your home could be key to tackling loneliness, research collated by national charity Blue Cross suggests.

The national pet charity looked at the research before Christmas, a time when loneliness is often intensified for those without friends, family and loved ones to celebrate with during the festive period.

The academic research showed that welcoming a pet into your home can help alleviate loneliness and help people to feel part of society around them.

For widower Mike Elliston, eight year old Jack Russell Flora helped to a fill a void in his life when he rehomed the former stray from the charity’s rehoming centre in Wherstead, Suffolk. 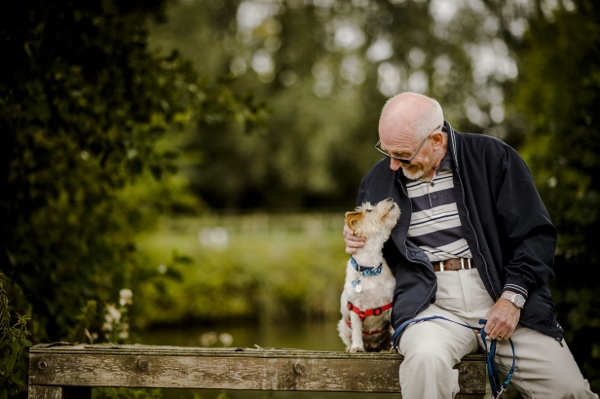 Mike was ‘feeling quite lonely and lost’ until Flora came into his life.
Photo: Blue Cross

The 75 year old, who had lost his wife and their rescue dog Molly just months apart, said: “She’s brought me companionship and some joy back into my life.

“It was a double blow, losing Molly. She had been a big part of our lives. I was obviously feeling quite lonely and lost before Flora came along.”

The effects of loneliness cannot be understated, specifically around a time of year traditionally perceived to be about family, sharing and togetherness. Often loneliness entangles itself amidst other symptoms of depression, low self-esteem and anxiety.

For Rachel Bowles her Blue Cross rescue dog Hunter helped her to leave the house for the first time in a year after her spinal cord was damaged during routine surgery – leaving her in a wheelchair and unable to walk. 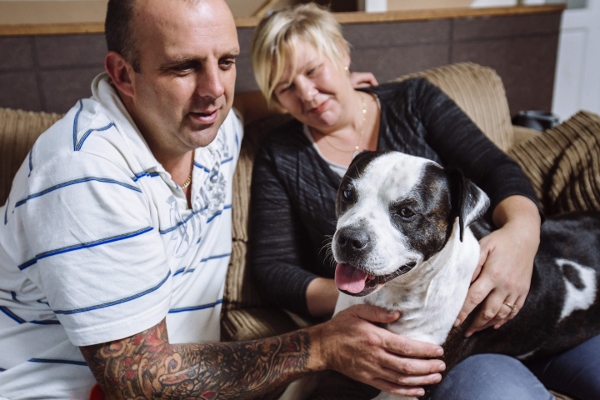 Rachel, 44, was forced to give up her full time job and while her husband Jeff was out at work she felt isolated and lonely with no one to talk to. But her lovable rescue Staffordshire bull terrier Hunter has changed all that, giving her the confidence to get out and about and talk to people they meet in the street.

“For me things have changed because I have company in the daytime now and someone to talk to and a reason to get out and about and I feel more confident on my mobility scooter if I’ve got the dog with me,” Rachel said.

The research collated by Blue Cross showed people feel significantly less lonely than non-pet owners after eight months of pet ownership. Similarly, those reporting feelings of loneliness three or more times a week dropped from 36% to only 13% within just a few months of owning their new pet.

Among those who had a pet, seven in ten reported talking to more people outside of their home, including other animal-owners and non-animal owners.

“Just the comforting patter of paws in a home can make us feel safe, secure and loved,” said Tracy Genever, Head of Education at Blue Cross.

“Pets can help us in so many ways from rescuing us from loneliness, giving us confidence and motivation to calming and supporting us.

“While we would always disagree with giving a pet as a surprise present, Christmas can actually be a perfect time to introduce a new companion into your home if you’re on your own at this time of year and bring much joy and love to a home.”

Blue Cross is a national charity that has been helping sick, injured, abandoned and homeless pets for over 120 years. Click here for more information.