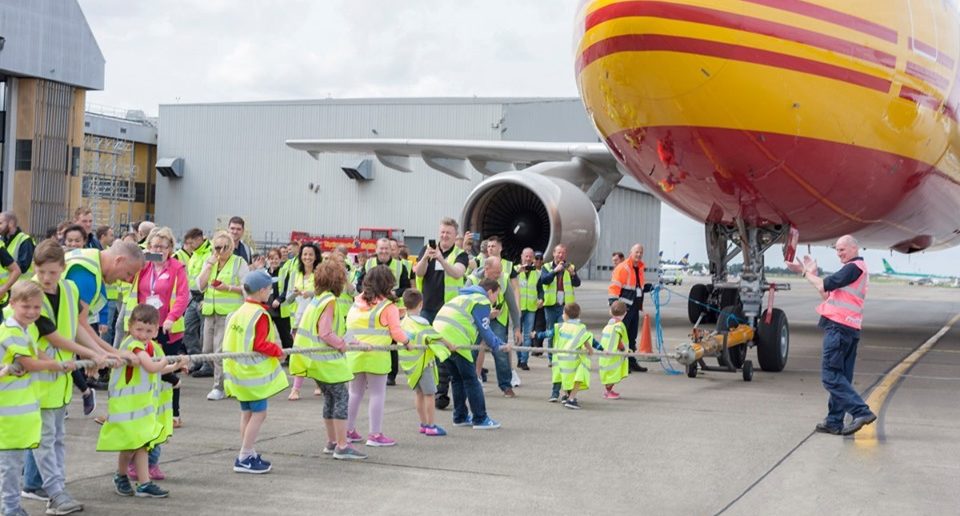 When it comes to raising money for charitable causes, no shortage of creative ideas exist. Recently, teams across Ireland came together at Dublin International Airport to raise awareness and money for Aoibheann’s Pink Tie, an organization dedicated to helping cure childhood cancer. The event invited participants to test their skills at pulling a massive DHL A300 plane 10 meters across the tarmac.

The fundraiser represents the brainchild of Jimmy Norman, an engineer at Dublin Airport and co-founder of Aoibheann’s Pink Tie. Like strongman events where participants struggle to move semi tires and other enormous objects, this one featured teams of 25 people to pull the massive aircraft. Dublin Aerospace interrupted business as usual for four hours to allow teams to participate.

What Is Aoibheann’s Pink Tie?

Norman and his partner Mick Rockford founded Aoibheann’s Pink Tie after Norton lost his daughter, Aoibheann, to cancer at the age of 8. While struggling with his daughter’s illness, Norton found that while he had a wide group of family and friends to support him and his child, many families on his daughter’s ward did not.

When a child falls ill, their parents’ lives revolve around trying to help them heal. However, many families lack the financial and societal resources that enable them to focus fully on their child’s care. Ireland has a social security system in place, and a carer’s benefit can help parents who must leave the workforce to tend to an ailing family member. However, individuals must qualify, and some experience hardship while awaiting benefits.

The problem grows more severe if either parent maintains employment during the child’s illness. Driving back and forth to the hospital often takes up much of the nonworking parent’s life, and bills such as phone and internet fall by the wayside due to economic circumstances. If parents previously relied upon a dual income to meet their expenses, they often face difficult choices between paying needed bills and buying food.

This creates additional stress in what is already an anxious time. Experts advise parents and caregivers assure children they will be taken care of, but kids are perceptive. They can tell when there is tension in the family, which can impact their recovery.

Aoibheann’s Pink Tie mission statement involves giving practical aid as well as emotional support to these families. They aim to help parents protect their well-being throughout the process. Assistance is awarded on a case-by-case basis.

The name of the charity comes from the pink ribbon attendees at Aoibheann’s funeral wore to honor her memory. Pink was Aoibheann’s favorite color.

About the Plane Pull

A DHL A300 weighs in at a staggering 165 metric tons. To give an idea of how heavy this is, the average elephant weighs approximately 6.8 metric tons, meaning participants tried to move over 24 elephants. Since teams had 25 participants, each contestant pulled nearly the weight of one full-grown animal themselves.

The Swissport team took the gold in this year’s competition, pulling the hefty craft 10 meters across the tarmac. Throughout the day, various promotions raised significant amounts for Aoibheann’s Pink Tie. One major donor, Boeing, wrote out a check for $15,000 for the charity in conjunction with Children from St. John’s Ward, Crumlin Hospital.

The plane pull is not the only event the charity organizes to raise money for the cause. In March, the organization hosted a ball at Dunboyne Castle. In April, it hosted a bake where participants took a cake with them to work to raise funds. Also in April, the charity hosted a Royal run/walk, as well as a half-marathon in June. Those interested in participating can monitor the events page of the Aoibheean’s Pink Tie website or follow it on social media.

Childhood cancer can devastate a family. However, organizations like Aoibheann’s Pink Tie aim to help families with financial resources and practical support during their time in need. It’s a good idea to support worthy charities like Aoibheann’s by attending events like their recent plane pull.