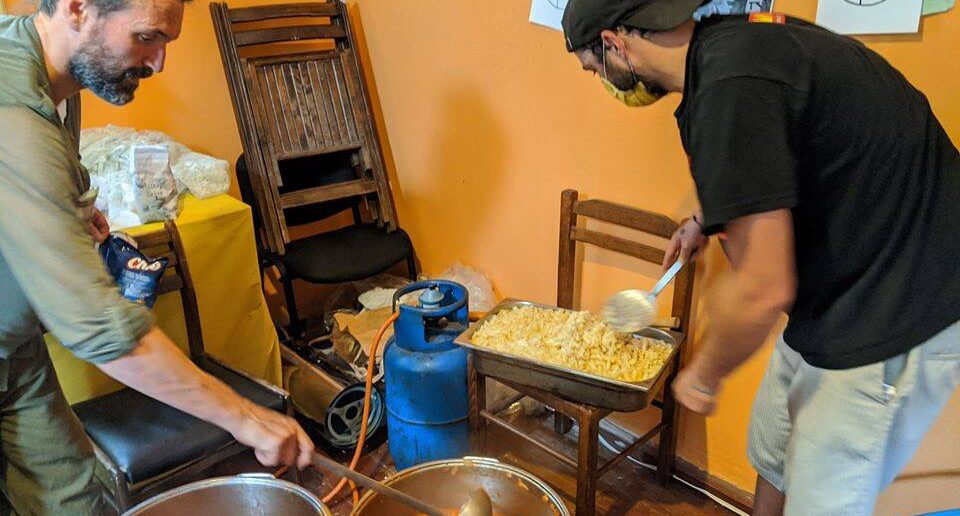 It’s a Sunday morning in the capital of Bulgaria, and once again volunteers from all walks of life have gathered in the Solidarity Kitchen to prepare over 100 meals to be shared with disadvantaged people.

For over four years, the Food Not Bombs Solidarity Kitchen in Sofia has been providing healthy vegan meals to homeless and otherwise socially disadvantaged people, as well as helping people access the medical and mental health support they need.

The Bulgarian chapter of the international all-volunteer movement Food Not Bombs is a self-organized initiative for preparing and sharing food and clothing together with disadvantaged people, not just for them.

“Food Not Bombs practices solidarity, not charity.” Said Myles Bagnall, one of the group’s coordinators. “We support people with a range of problems, but more and more we focus on standing with people, engaging them in every stage of the process of preparing, rescuing and sharing food.”

According to the National Statistical Institute, 22% of people in Bulgaria live in poverty. Food Not Bombs Sofia performs a variety of vital functions, including assisting people in need in navigating existing social support systems, such as helping people find housing. However, the aim of the Solidarity Kitchen goes beyond aiding people materially. The group works to create a sense of community to combat the social isolation which often accompanies homelessness.

The group’s efforts continued throughout the pandemic, with all necessary safety precautions in place, when the community needed the Solidarity Kitchen most. Increased economic hardship meant that during lockdown, the number of people looking to receive food from the group was almost double the usual number. In addition to meals, the group also distributed bars of soap and vitamins.

The Solidarity Kitchen is committed to Food Not Bombs’ mission of minimising food waste, sustainability and peaceful social change. The majority of food used to prepare the meals is donated and would have likely gone to waste otherwise. The group has also supported a number of local activist groups by providing food for their meetings and uses its platform to raise awareness of environmental and social justice issues.

“From the small group that met in a car park to hand out food, I’d say we have come a long way.” Myles added.

Food Not Bombs Sofia can be found on Facebook here.