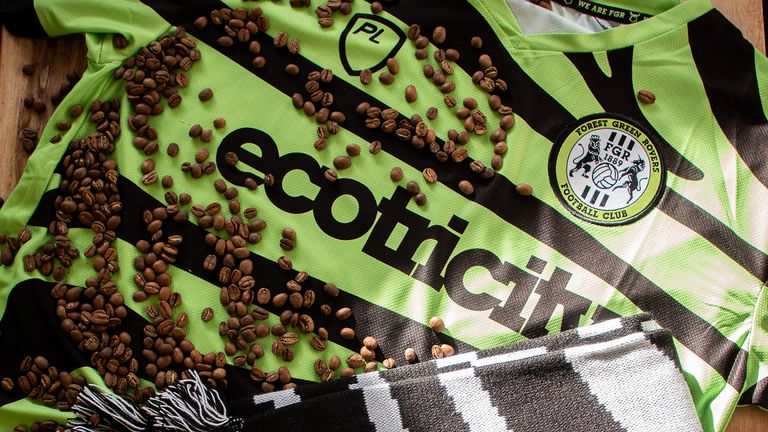 The team’s previous kit was made out of bamboo, but the new home kit, called the ‘zebra kit’, is lighter to wear, more breathable and hard-wearing. Made from 35% recycled coffee grounds and 65% recycled polyester, the team debuted their kit during their 3-0 win against Colchester on Saturday 27th February.

With each shirt purchased the club are making a donation to the Gloucestershire NHS and One Tree Planted.

Dale Vince, the Chairman of the Club said:

“Our adventure in alternative materials continues. When we pioneered bamboo with PlayerLayer two years ago it was considered a pretty revolutionary idea, and the thought of using coffee grounds is no less radical or surprising.

“It’s time the world of football wakes up and smells the coffee about the future of the planet. If nothing else, this prototype kit will bring new flavour to that old cliché of grinding out a result.”

The Gloucester based football club are famous for their sustainability, having become carbon neutral in 2017. The club began their sustainability mission in 2010. Since then they have introduced electric car charging points for players and fans travelling to the stadium, and become the first football club to serve a completely vegan menu to players and fans. Other green initiatives include solar panels, park-and-ride schemes for fans, recycling used cooking oil into biofuel and cutting their pitch with the football leagues’ first robotic lawn mower run by solar power.

Planning permission to build a new stadium for the club, which will be the greenest in the world, was granted in 2019. Called Eco Park, the stadium will hold up to 5,000 fans and will be constructed mainly from wood.

“75 percent of the carbon footprint of all stadia in their entire lifetime comes from the materials they’re made from. So we’ll have the lowest footprint of any stadium anywhere in the world since the Romans invented concrete”.

Chairman Dale Vince, a green energy businessman, joined Forest Green Rovers in 2010 becoming a major shareholder. Soon after Vince was appointed club Chairman. He is passionate about changing the impact football clubs have on the environment and is keen to encourage other clubs to take up similar green strategies.

The club has won many green and sustainability awards over the past few years. These include the Green Heart Hero Sustainability in Sport award, presented by the Climate Coalition in Parliament, and the Green Transport Project of the Year, due to their commitment to providing electric vehicles and charging points at the club.

Forest Green Rovers’ goal is to reach the Championship (the club is currently situated in League Two), to enable greater reach and publicity for their green initiatives and to bring the climate crisis to attention.

Annie is a Master's student at UCL studying Gender, Society and Representation. She is passionate about people, and hopes to work in the third sector following her studies.