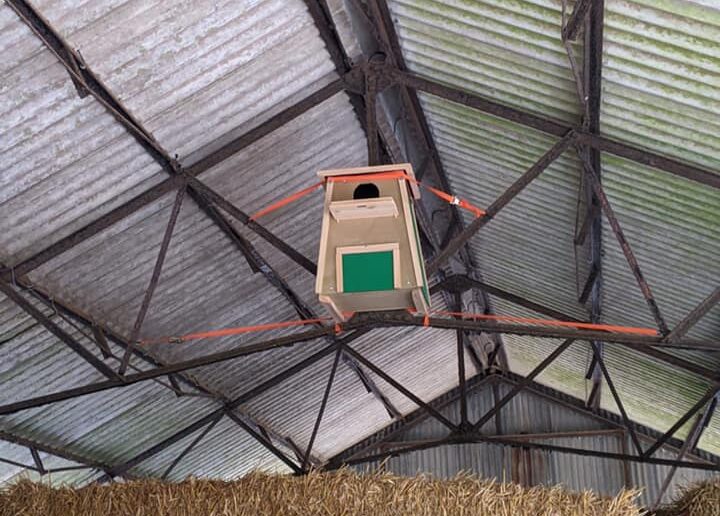 By Nisha Kotecha on May 5, 2021 0 Comments
Photo: The Owl Box Initiative

A new wildlife conservation project is giving a remarkable insight into the domestic arrangements of a barn owl family, by live-streaming nest-cam footage from a barn owl nest box in Dorset.

In true reality TV style, there has already been drama aplenty as the pair have begun their courtship, settled into their home, and got on with the business of mating. The camera has even captured the female laying an egg. The nest cam is now streaming 24 hours a day, ‘barn wifi’ permitting, and viewers should soon be able to see fluffy owlets hatching from the clutch of four eggs laid so far by the female.

Owl Box Live is part of The Owl Box Initiative, a new project from the Game & Wildlife Conservation Trust (GWCT). A grant from the Green Recovery Challenge Fund is allowing GWCT scientists to work with 100 farms over 40,000ha, to inspire farmers and communities to help conserve this most enigmatic and beloved British bird.

As part of the project, 64 new barn owl boxes are being installed on farms across Dorset, Hampshire and Wiltshire. 50 are in place already and will be monitored during the breeding season, along with many more existing boxes, with a further 10 set to be installed in the Autumn. Adult barn owls will also be GPS-tracked to better understand their use of arable habitats for foraging and to enable farmers to see the effects of their conservation efforts. The data gathered will allow GWCT scientists to develop guidance on managing land to benefit barn owls and other species.

“Although barn owl populations in the UK have stabilised after declining in the twentieth century, as a top predator, the barn owl provides an indication of ecosystem health, and conservation measures for owls also benefit wider farmland biodiversity,” said Dr Niamh McHugh, project leader at the Game and Wildlife Conservation Trust. “It is fantastic to be able to watch this pair of owls going about their lives and preparing to rear chicks. We hope that seeing these wonderful, often elusive, birds up close will inspire people to recognise the essential work that many farmers do for wildlife and encourage farmers to continue to make further positive changes.”

Project organisers will provide feedback to the farmers, their families, and wider communities, on ‘their’ barn owls, with the aim of involving them, helping them to feel connected with farmland wildlife and improve understanding of wildlife friendly farming measures.

The scientists and farmers are working with local conservationists and bird-ringers, building better relationships between volunteer groups and farmers. A range of resources for schools and community groups will also be available and by live-streaming a barn-owl brood the project also aims to engage people further afield.

Barn owls – what to look out for

Barn owls are amongst the most iconic and instantly recognisable of farmland birds, with their white underparts, golden back and heart-shaped face which acts as a disc to focus sound. They are well adapted to hunting small mammals across arable land, with a light body weight and large wings enabling them to fly slow and silently. Unlike other owls they do not hoot but occasionally emit an eery screech.

Typically, barn owls lay four to six eggs over 8 to 21 days between March and August and, unlike many species, they begin incubating them immediately, meaning that the eldest chick can be up to three weeks old by the time the last egg hatches. By eight to nine weeks owlets will have attempted their first flight and by 10 – 11 weeks they will begin to look like adults and will be starting to hunt for themselves.

The Owl Box Initiative is building on volunteer efforts by farmers, local ornithologists and GWCT researchers who have been monitoring existing local barn owl boxes in southern England to understand breeding success.

Monitoring is being expanded to 100 farms across six Farmer Clusters in Wiltshire, Hampshire and Dorset. Farmer Clusters are groups of neighbouring farmers who work together, helped by a bio-diversity advisor, to collectively deliver benefits for soil, water and wildlife at a landscape scale.

Viewers can peek inside the box, which has been occupied by a pair of owls, here.