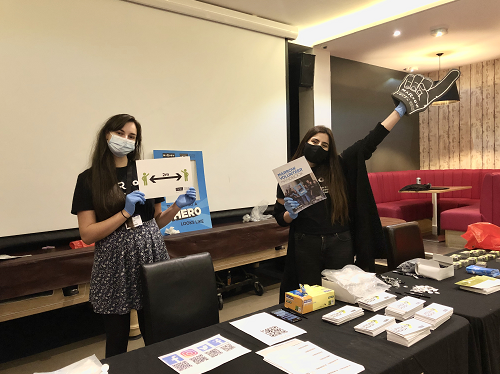 By Nisha Kotecha on June 2, 2021 0 Comments
Two members of the Plymouth Marrow committee at their donor recruitment event at Plymouth’s student union

Students from 40 UK university ‘Marrow’ societies have recruited over 1,000 students to Anthony Nolan’s stem cell donor register. They have also raised £26,293 this academic year, despite the cancellation of almost all events due to the pandemic.

‘Marrow’ is the name given to the blood cancer charity Anthony Nolan’s network of student volunteer groups. Over the last academic year, since September 2020, 1,167 potential stem cell donors have been signed up to the Anthony Nolan stem cell register by lifesaving Marrow volunteers. Any one of these students could give a second chance of life to someone with blood cancer or a blood disorder.

Usually, Marrow would hold around 500 donor recruitment events throughout the year, but this year, due to social distancing restrictions and lockdowns, they were able to hold just two. Plymouth Marrow ran a small socially distanced event in October, just a couple of days before the second lockdown, and they were the first group to use the charity’s brand-new digital data capture technology. Those signing up to the register were given their own unique QR code to scan on their own device, which took them to an online form, rather than filling in a paper form which was how the process worked previously.

Unable to hold events, Marrow groups used their social media channels and marketing across university campuses to reach out to students at the university, to let them know about the Anthony Nolan register and how they could one day save a life.

This year’s highest recruiting group were Cardiff Marrow, who recruited over 100 people to the register this year, by reaching out to students in this way.

The group have a history of signing up a high number of potential donors. Last year’s committee were presented with the ‘Ethnic Minority Advocate of the Year award’ by comedian Nish Kumar at the Anthony Nolan Supporter Awards in February, for their work recruiting potential donors from ethnic minority backgrounds.

Marrow groups hold various fundraising events throughout the year, however due to the pandemic they haven’t been able to rely on their usual fundraising methods and have had to be particularly creative with their fundraising ideas.

One of these groups is Warwick Marrow, who raised an incredible £3,091 this year.

Warwick Marrow committee member, Chloe, said, “Our Raise A Swab campaign was our biggest fundraiser. It was easy to feel disconnected from each other during lockdown and Raise a Swab was a way to bring us all back together doing what we love!“

Joining the Anthony Nolan register involves a simple cheek swab, but the organisation, postage, and processing of the swab in a lab costs the charity £40 per person.

Chloe added, “Every person involved in the campaign had a target of raising £40, the cost of putting a potential donor on the register.  We had two people do a three-legged 5km race, another person played the harp every day for a week and others ran 75km. The campaign provided a great opportunity for people to show off their niche talents.“

Marrow was first created in 1998 and since then, student groups up and down the UK have recruited over 150,000 potential donors, that’s 150,000 people waiting to give someone with blood cancer a second chance of life.

Charlotte Hughes, Marrow Volunteer Engagement Manager at Anthony Nolan, said, “Marrow really are the unsung heroes. This year has been unlike no other, yet they have continued to work hard throughout the year, alongside their studies, raising money and signing up potential donors to the stem cell register.”

“For many people with blood cancers or blood disorders, receiving stem cells from a stranger will be their last chance of a cure, so the work done by Marrow societies is invaluable, particularly because young people are most likely to be chosen to donate. In the last two years, over a quarter of stem cell donations were from donors recruited by Marrow.“