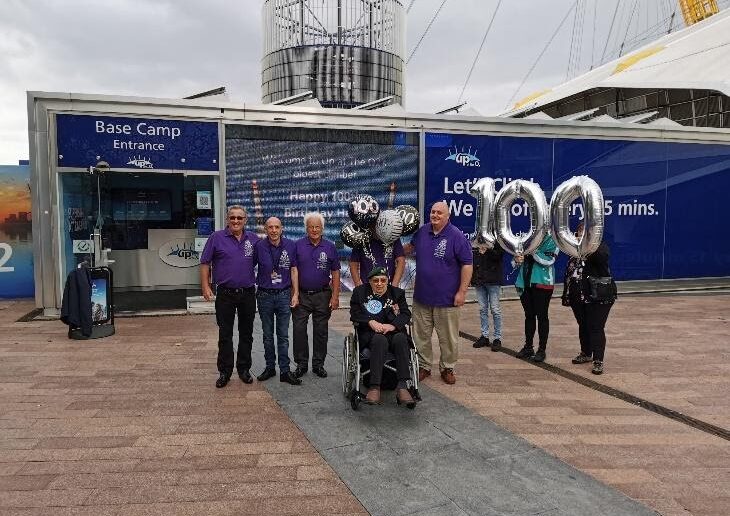 Veteran Celebrates his 100th Birthday Climbing Over the O2

On the 30th June, veteran Harry White celebrated his 100 birthday by climbing over the dome of the O2 in London.

Harry defended his own title as the oldest person to take part in The O2’s roof walk. He set the record at the age of 97 and returned at the end of June to celebrate his 100th Birthday and beat his own record.

A keen sportsman, Harry always wants to try new things. From his days in the Royal Artillery to the RASC Air Supply, playing badminton at a club in East Ham to qualifying as an archery coach, it’s safe to say that Harry has always been on the move and now at 100 years old, he completed the wheelchair climb. He is a true inspiration for anyone looking to challenge themselves as restrictions across the world start to ease.

Speaking about the experience, Harry said, “I try anything once. If I like it I do it again, if I don’t like it I don’t do it. People don’t realise what they’re missing until they come up and see what the rest of the world looks like at a height. When you’re up high like this, you get a good view of everything that’s going on around you.”

Harry’s daughter Yvonne planned this fabulous birthday for her Dad, and he was joined at the O2 by fellow veterans John King, Albert Wiltshire, Robert Clarke and Michael Gosling and volunteers from the Taxi Charity for Military Veterans to help celebrate his 100th.

Dick Goodwin, Vice President, Taxi Charity, said, “Harry has been part of the Taxi Charity family for many years, and we were delighted to join him today at the O2 as he completed this challenge and beat his own record as the oldest person to complete the 52-meter-high climb. When I asked him what the experience had been like he told me it had been ‘amazing but windy’! We can’t wait to see what he plans to do next.”