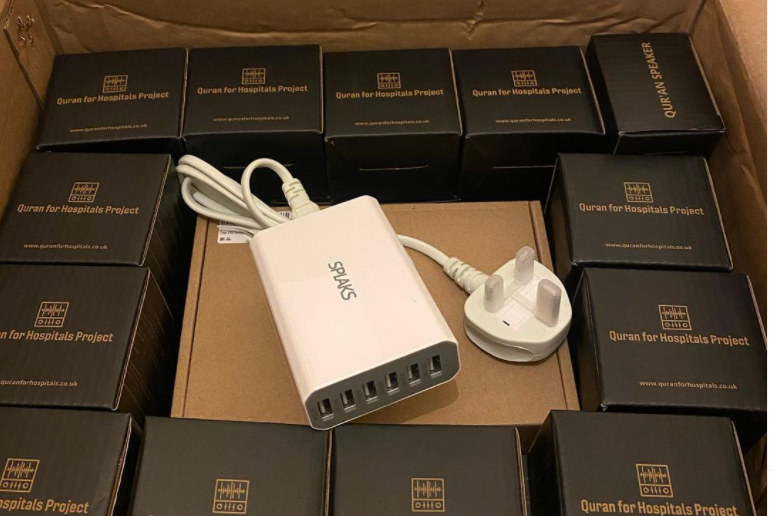 The ‘Quran for Hospitals’ Project has been set up to provide hospitals with Quran Cube Speakers. Around 4000 have been distributed and are available at 500+ hospitals in the UK.

This project was initially set up by Syed Ahmed, a 23-year-old teacher from Greater Manchester. On the 10th of January 2020, just a few months prior to the Covid 19 outbreak, his father was in hospital suffering from pneumonia. However, his father had no access to the internet to be able to listen to recitations of the Quran. To combat this, Syed provided his father with a Quran cube speaker which brought him peace and made him feel less lonely. This led to Syed wanting to help other people in this way too.

The project initially provided Quran cubes speakers to the Royal Oldham and the Bradford Royal Hospitals, however, as the pandemic began to accelerate, more and more people were admitted to hospitals. This increased the demand for Quran cube speakers, as many patients found comfort and reassurance listening to recitations of the Quran through the Quran cube speakers. Consequently, this led to as many as 100+ hospitals across the UK requesting a speaker.

The ‘Qurans for Hospitals’ project has grown rapidly with the Quran cube speakers allowing many patients to alleviate their anxiety and stresses during this pandemic. It has also provided an alternative to those who are unable to access the internet or other platforms to listen to the Quran.

Find out more about the ‘Qurans for Hospitals’ Project here.