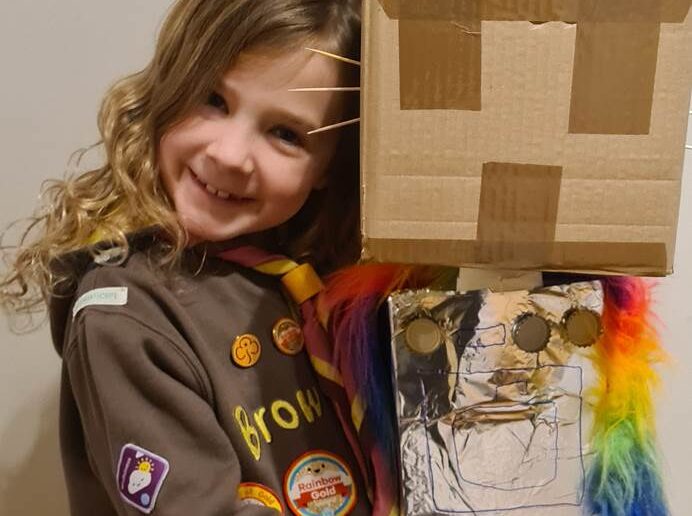 Girlguiding partnered up with Google and created a competition for Brownies to invent their own robots. Launched last November, the competition as part of Googles Digital Adventure aims to inspire more girls to pursue careers in technology and explore their skills. To enter the competition, they had to design their own robot and think of a task it needed to do, as well as a problem to solve and how it would do it.

The winner of the competition is 8 year old Amy, from a Girlguiding group in North Yorkshire.

Her idea for the robot – which she named Broogle – was to keep elderly people company. Broogle has removable fur to stroke and also acts as a blanket. The robot also has an ‘oven’, ‘cup of tea maker’ and ‘storage features’.

“I knew I wanted to make a robot cat as a companion because many people have been sad and lonely during lockdown, especially older people.. It is pronounced Brew-gull because she brews tea!” Amy said.

Amy plans to pursue a career in technology and science, as she has learned more about coding and algorithms throughout this competition process.

Laura Dumitru, a motion designer at Google, has brought Amy’s idea to life as an animation, using Amy’s own voice for its command. As well as this, Amy’s Brownie unit will have the opportunity to participate in an online workshop where they can learn how to animate their own designs.

Munchbot, a robot created by 8 year old Suki, received a special commendation. The robot was designed to transport food safely to people in hospitals and care homes.

“I feel so happy to have been awarded a special commendation. The pandemic made me think about the people in hospitals and care homes and I wanted to design something to help them. I thought this would be a safe way to give people their food and make them smile as well,” Suki said.

This competition has not only brought the Girlguiding community together but has been a fun and inclusive competition that has provoked thought over what the world needs at this current time, especially because of the pandemic.

“It was inspiring to read all the wonderfully creative Brownie robot inventions. Both Amy and Suki’s designs had so much thought behind them and recognised the importance of community and helping others, which is at the heart of Girlguiding’s mission. It’s been a challenging year for everyone, especially children and young people, so we’re delighted to be able to offer these fun activities and to celebrate the girls’ creative designs. Through our partnership with Google, we’re building on our offer to give girls skills for their futures and specifically to encourage more girls and young women to learn and have fun with STEM,” said Angela Salt OBE, Girlguiding CEO