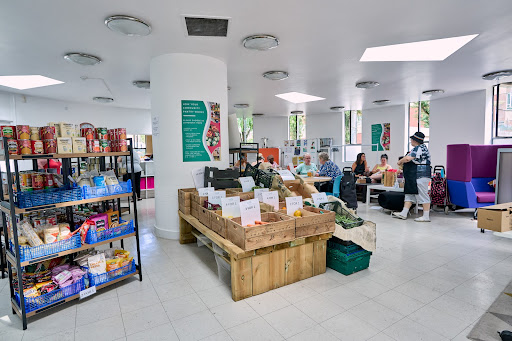 By Emily Whitchurch on September 23, 2022 0 Comments
Photo: The Cook for Good Pantry

Near the grandeur of St Pancras Station and idyllic Regent’s Canal, a former laundry building now provides a week’s food shop for just £3.50 with coffee, soup and socialising thrown in for free. Aiming to alleviate some of the stigma and shame surrounding food banks, Cook for Good lets locals buy surplus food that otherwise could’ve been thrown away – supermarkets bin the equivalent of 190 million meals each year. The King’s Cross pantry is generously stocked with fresh, frozen and cupboard ingredients, giving residents the freedom to choose what they purchase and chat to staff for some creative meal ideas. As such, pantry users can reduce food waste and simultaneously fund cooking classes and community meals, many of which are free to attend.

London has been particularly devastated by the UK’s current cost of living crisis, with YouGov reporting that just under a third of Londoners are having to buy less food and other essentials, and almost one in five are “financially struggling”. On top of this, government reports from earlier this year shed light on London’s loneliness epidemic, with 700,000 residents feeling lonely “always” or “most of the time”. At Cook for Good, however, the atmosphere is far more uplifting. Expanding on the idea that the kitchen is the heart of a home, co-founders Robinne Collie and Karen Mattison have created a communal space on the Priory floor and the Greens Estate that is both practical and enjoyable. Cooking classes offer inspiration for after school snacks, family meals and basic kitchen skills, while regular community meals give residents the chance to meet and catch up with neighbours over freshly cooked food.

Businesses can also benefit from this new social venture, with team building events allowing staff to come together and cook meals for those who need them. Longer-term and individual partnerships have also been formed – technology giant Meta provided generous funds to transform unused buildings on Priory Green, while former politician Ed Balls hosts an “intimate evening of cooking and conversation” on 20th September to raise money for the pantry and classes. Cook for Good thus creates mutually beneficial relationships across the community, connecting with similar organisations across London and keeping the views of Priory Green residents at the heart of the company’s growth.

By combining social interaction and community cultivation with vital food services, Collie and Mattison present a thoughtful solution to the nation’s current socioeconomic hardship that could easily be modelled in other neighbourhoods in and beyond London.