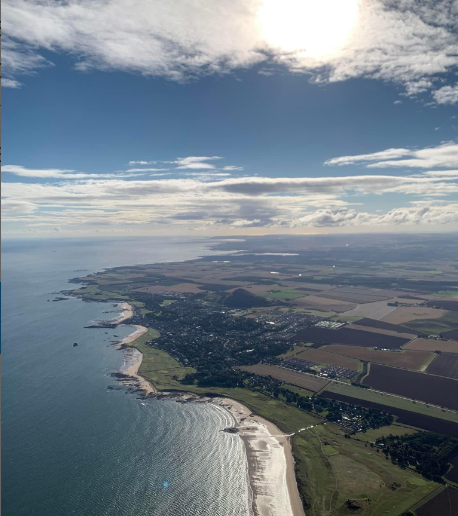 A 61-year-old man recently diagnosed with an aggressive form of brain cancer has completed a charity microlight flight to raise funds for the Brain Tumour Charity.

Jamie Fairweather had just retired from his job as an investment manager working for The Big Issue. He had planned to spend his retirement golfing, cycling, gardening, and spending time with his children and his grandchild.

His retirement plans changed with the news of his cancer diagnosis. From living a healthy and active lifestyle, Jamie is now receiving a treatment of 30 radiotherapy sessions and considering chemotherapy as the next stage, has a full-time carer and is semi-paralysed.

Despite all this, Jamie has not lost his positivity and hope. Instead, the diagnosis took him to the skies by flying a microlight flight. to raise funds and awareness for the Brain Tumour Charity.

So far, Jamie has raised £45,633 via his ‘Reach For The Sky’ fundraising page, four times his original goal.

With his family supporting him, Jamie’s 40-minute flight with pilot Sarah Curtis took off over his family home in Gullane, Luffness Golf Club, and out to Bass Rock. Friends and family could be seen on the ground spelling out the word ‘Reach’ as a nod to Jamie’s fundraiser.

After landing, Jamie said, “That was really, really amazing. It was a bit scary at the beginning, but once you get your balance and perspective, it’s absolutely incredible. We live in the most beautiful part of the country. I loved it.”

On his JustGiving page Jamie shares his story of how he discovered he was ill:

“On May 17 this year I returned from a holiday where I was cycling, golfing, walking and running in beautiful Mallorca. I had had a great time but had noticed that my balance was not quite right. Thinking I had an inner ear infection or, worst case, early onset Parkinson’s as my father is a sufferer, I went to the Doctor on May 19. After tests I was sent for a CT scan and an MRI where lesions were found. On June 2, I had a biopsy and 11 days later I was told that I have a Glioblastoma which is inoperable, incurable and an average life expectancy of 12 months.”

The Fairweather family hope their story can raise awareness and educate people on the issues of under-research and under-funding for life-threatening diseases like Glioblastoma.

“According to the Brain Tumour Charity, it is the biggest cause of cancer deaths for the under 40’s. It is indiscriminate, striking 500 children a year, ripping the heart out of a family over a really short period of time”, writes Jamie on the ‘Reach For The Sky’ JustGiving page.

“It’s totally brutal. Your independence, livelihood and life disappear in weeks and then you have to focus on quality of life while you wait for the inevitable eventual outcome. 12,000 people are diagnosed every year, 33 per day, and 5,300 die annually. Life expectancy is reduced by 27 years.”

“And yet, as overall numbers are not large, this devastating disease gets 3% of the £700 million funding for research.”

Mary Fairweather, Jamie’s wife, said to The Northern Newspaper, “The diagnosis completely carpet-bombed our lives. But Jamie has been so brave, he’s such a positive person. I am glad he did the flight.”

Jamie added, “I cannot tell you the support and kindness of my friends and family who have been extraordinary since this diagnosis, which I would wish upon nobody.”

“Their support is something that you know is there, but when you see it happen in front of you, it’s incredibly emotional, and incredibly empowering… it is actually very sad as well.”

A third year BA Comparative Literature student studying at UCL, Zainab is an aspiring journalist who is passionate about arts and culture, education and exploring different perspectives on social issues.