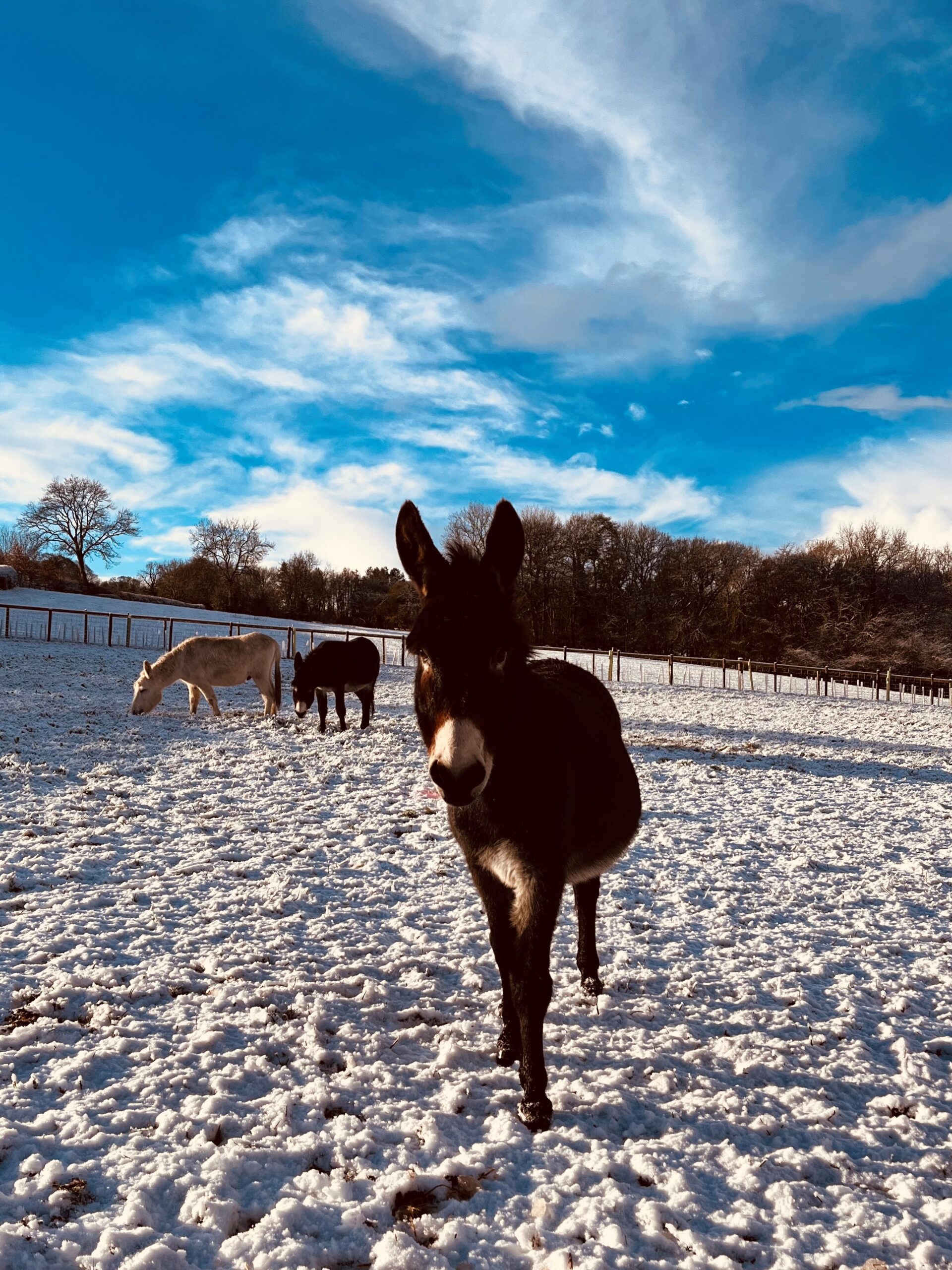 Brays of Christmas Cheer for donkeys in new home

The bray of donkeys may be heard across a particular hillside in rural North Wales this December as a trio of donkeys look forward to spending their first Christmas in their new home as part of The Donkey Sanctuary’s Rehoming Scheme.

The donkeys, named Crixus, Edric and Ferguson, have landed on their hooves and now live with their new Guardians in the stunning Denbighshire countryside.

Jo Meehan and Vinny Forde had been supporters of the animal welfare charity for many years, although their only experience with donkeys had been meeting some that lived near their previous home in Lancashire. The couple would stop and see them whenever they passed by their field and over time began to understand what beautiful sentient creatures they were.

They also read in the charity’s newsletter about how the experience of rehoming a pair of donkeys had been life changing for both the donkeys and Guardians, and when they decided to move to Wales, the idea of rehoming donkeys began to form.

Before joining the Rehoming Scheme, Crixus, Edric and Ferguson were part of the herd at The Donkey Sanctuary’s regional centre in Manchester. Where they supported vulnerable members of the community through a range of donkey-assisted activities.

The ground-based activities support the development of people’s life skills and wellbeing, helping individuals to better deal with challenges in everyday life, while also promoting positive attitudes towards donkeys.

With no previous equine experience, Jo and Vinny’s journey began with The Donkey Sanctuary first assessing their suitability. They were then given an idea of the commitment they needed in order to provide a loving Guardian home for the charity’s donkeys.

After being identified as suitable Guardians, the couple undertook the first part of their training online due to the lockdown. They also used this time to get their land and shelter prepared for the donkeys.

Once restrictions were lifted, the day came when Jo and Vinny were able to visit the Manchester sanctuary and meet the donkeys. Over a period of time they received further hands on training, which included how to fully care for the animals and what they could expect once they were living with them, Then in July, the donkeys left the sanctuary for the final time, to join Jo and Vinny at their home in Wales.

Throughout the rehoming process, Jo and Vinny have had the support of their regional Donkey Welfare Adviser Kia Thomas, plus they are also safe in the knowledge that the team from the Manchester centre are just a phone call away.

Since being in their new home the donkeys have blossomed and their characters have shone through. Crixus, who Jo has renamed ‘Spud’ after her father’s pet name for her, spends lots of time with Edric, often grooming each other and sharing playtime with a hula-hoop or a welly boot. While playful donkey Ferguson loves a good run around with Spud.

“We can’t imagine life without them now,” said Jo. “They are really settling in and every day we see a little more progress with them. It is a lot of work, but we honestly love every minute of it. I never realised just how therapeutic and good for the soul poo-picking could be!

“I’m sure there will be some special Christmas vegetable themed enrichments for them, and they like to play with empty cardboard boxes, so they will have lots of fun.

“I think they are all hoping that Father Christmas brings us some new wellies, as they have been eyeing up the ones we wear now. They seem to like us singing, so I’ve started singing some Christmas carols to them – Little Donkey obviously, to get them in the festive mood!”

Donkey Guardians are essential to The Donkey Sanctuary, providing safe, loving homes for hundreds of donkeys. The Rehoming Scheme helps to free up vital space in their sanctuaries for donkeys who require more specialist care.