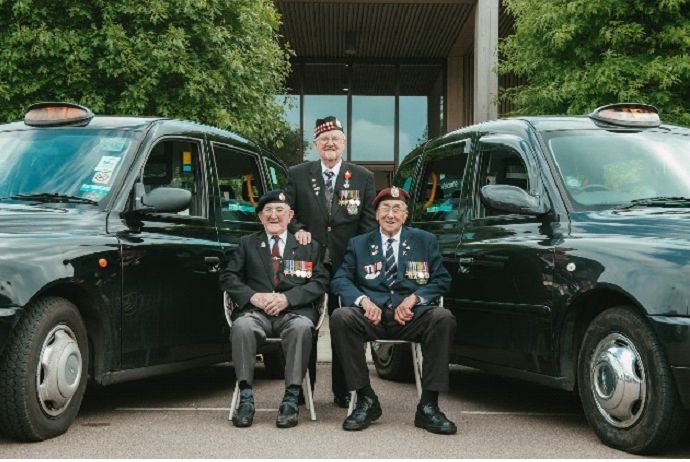 2023 will mark the 75th anniversary of the Taxi Charity for Military Veterans, a remarkable milestone for a small charity which supports veterans throughout the UK.

Founded in 1948 by three London Black Cab drivers who wanted to arrange for friends who had been injured in WWII to have a day out, the charity was initially called The London Taxi Benevolent Association For War Disabled but changed its name to The Taxi Charity for Military Veterans in 2016, to better reflect its aim to support veterans from all conflicts.

The Taxi Charity, which has always been run by volunteer London black taxi drivers has supported thousands of veterans over the years and is the only veterans charity with the sole purpose of giving those they support social events and fun to enhance their lives.

The ultimate accolade for all those involved in the Taxi Charity was receiving the Queen’s Award for Voluntary Service in 2021, an award approved by Her Majesty Queen Elizabeth II and the equivalent of the MBE for charities.

“If funding allows, we hope to celebrate this amazing milestone not only with our traditional trips, to the Netherlands, Normandy and Worthing but also with an event on International Women’s Day, a party in the summer, a joint outing with the Household Cavalry, a shooting and a fishing day,” said Brian Heffernan, London cab driver and Chairman of the Taxi Charity.

During the pandemic, instead of arranging trips to Belgium and France, the Taxi Charity helped veterans get to clinics.

“As this remarkable and unique charity celebrates its 75th birthday, I pay tribute to the wonderful service it has provided for so many of this country’s veterans over so many years,” said The Taxi Charity Patron Vice-Admiral Sir Adrian Johns KCB, CBE, KStJ, ADC. “Recognising the significance of social interaction and camaraderie to former service men and women is as important today as it ever has been.  At the heart of the charity are the cabbies who give so freely and cheerfully of their time – long may they and the Taxi Charity continue their great work!”

Read more about the Taxi Charity via stories we’ve shared, and find out more via their website.