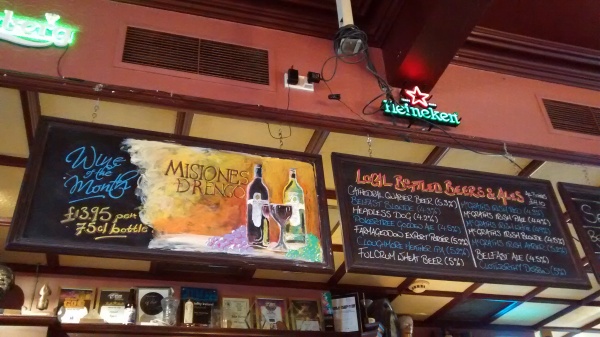 Located on Donegall Street in Belfast’s Cathedral Quarter, The John Hewitt first opened its doors in December 1999. The pub is unique in its ownership as it is owned by a charity, The Belfast Unemployed Resource Centre.

The Resource Centre had always relied on various grants to fund its work. In the mid ‘90’s they came up with the idea of generating some of their own funds by going into business.

John Hewitt, the late poet, socialist and Freeman of Belfast officially opened the Resource Centre in 1983, hence the name of the bar.

There is a great range of beers always available at The John Hewitt including some excellent local beers, such as from the brilliantly named ‘Farmageddon‘ (which aptly has a fascinating, ethical approach to brewing).

Some of the drinks available at The John Hewitt

With no TV screens, gaming machines or juke boxes there is a wonderful atmosphere in the pub. The award-winning pub is a popular meeting place for local writers, musicians, journalists and artists. Both the Belfast Festival at Queens and the Belfast Film Festival use the venue to stage events.

Two plaques have been put up on the wall of the stage commemorating two of the finest acts to play at the John Hewitt: SeaSick Steve and Mumford & Sons.

Charities Supported By The John Hewitt

Profit from the pub goes to The Belfast Unemployed Resource Centre, a charity which provides support, education, training and facilities to the unemployed and other groups suffering from social and economic disadvantage.

St Anne’s Cathedral, also known as Belfast Cathedral, is about a minutes walk away.

Titanic Belfast, the world’s largest Titanic-themed visitor attraction located on the very slipways where she was built at the heart of Belfast, Northern Ireland, is approximately 25 minutes walk away. You can pop in to The Dock cafe (a pop-up cafe with a honesty box rather than a till) on your way there

Belfast City Hall, the civic building of Belfast City Council, is a 10 minute walk away. Free public tours of City Hall are run at 11am, 2pm and 3pm Monday – Friday, and at 2pm and 3pm on Saturday. Pop into The Bobbin Coffeeshop, a social enterprise cafe located in City Hall, for a coffee or lunch.

Find out more about The John Hewitt by visiting their website: www.thejohnhewitt.com