Is this the best mum in the feline world?

A hero mum cat came to the aid of an orphaned, male kitten recently, when she accepted him into her litter and brought him up as one of her own at The Mayhew Animal Home.

Despite already nursing four of her own kittens and being blind in one eye, one-year-old rescue cat Carrie quickly stepped up to become a surrogate mum for ten-day-old Spiro, who was found as a stray without his mum and was desperately looking for some feline, motherly love.

The Mayhew’s Animal Welfare Officers were first alerted to Carrie when a concerned member of the public called to say they’d spotted a heavily pregnant, stray cat with a bad eye living in West Kilburn, North London.

The Officers brought Carrie straight back to the Home in Kensal Green, where Mayhew Cattery staff immediately settled her into a warm and comfortable cat cabin and the Vet Team gave her a thorough examination.

Straight away the Vet Team spotted that Carrie’s right eye was in a bad state; it was inflamed and there was a layer of scar tissue overlying the eye – it was evident she could not see out of it. The team suspected it had been caused by an ulcer in the eye, most likely as a result of a feline virus, which most domestic cats would normally be vaccinated against.

As Carrie was heavily pregnant and could give birth any time soon, the Vet Team unfortunately could only give her medication directly to the eye and would have to wait until her kittens had been weaned off her milk until they began full treatment and any procedures.

After two days at the Home, Carrie gave birth to six little kittens. Sadly two of her kittens passed away very shortly after birth and could not be revived by the Vet Team. Thankfully, Carrie’s other kittens, named aptly after famous Carries’ such as, Fisher, Bradshaw, Mulligan and Sissy (Spacek), were all healthy and happy.

Two weeks later, The Mayhew’s Animal Welfare Officers were called out to rescue ten-day-old, black and white kitten, Spiro, who was found abandoned in a garden without his mum. Spiro was too young to be left on his own outside without a mum and would not have survived if he had been left much longer, so the Officers brought him straight back to the Home, where the Vet and Cattery Team could care for him. 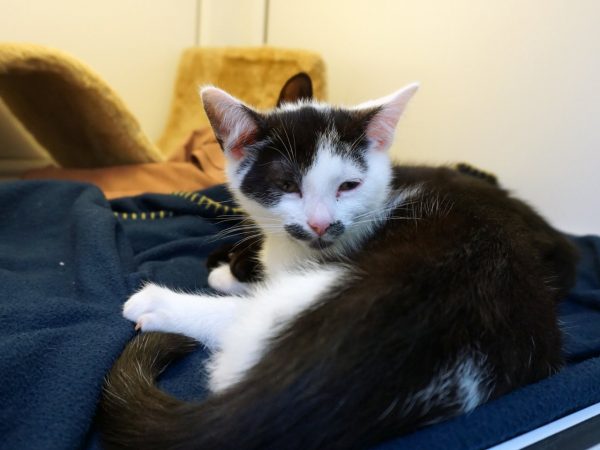 Spiro with an older foster sibling

Being so young, the Mayhew’s cattery team knew that for Spiro to be able to grow up into a healthy, normal adult cat, he would need either hand-rearing or a surrogate mum. Though The Mayhew try to do everything they can to step into the mum’s paws, there is never a real replacement for a caring, feline mother, and so the team decided to see if Carrie would take Spiro under her wing.

The Mayhew’s Head of Animal Welfare, Gillian Notton, said, “We suspected that Carrie would make a good surrogate mum as she has such a gentle, caring temperament. As her kittens are also a very similar age to Spiro, we also knew that her milk would be at the right stage for his development and that the others weren’t old enough to push him out of the litter.” 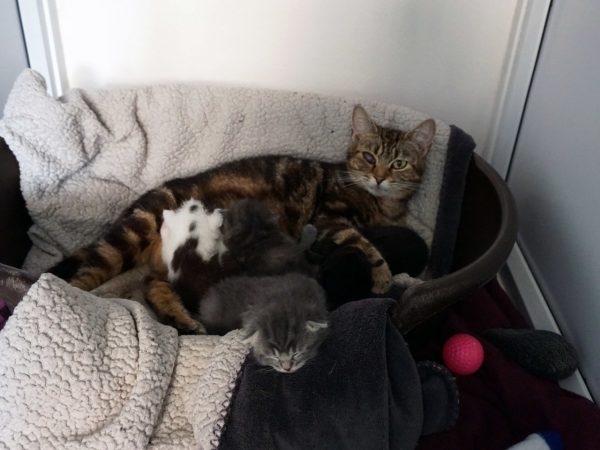 Carrie with her kittens and Spiro

“We slowly introduced Spiro to the litter, and despite the other kittens hissing at him at first, Carrie did not seem upset and appeared happy to welcome Spiro into her litter. After about ten minutes, Spiro settled down and joined the other kittens suckling for milk, and thankfully Carrie did not seem to mind, happily taking on the abandoned kitten.”

“We kept checking in on the litter every five or ten minutes throughout the day and night, but Carrie seemed relaxed and happy with the little edition to her family. No more than a day later, Spiro was completely settled in the litter.”

“Being a young mother who’s blind in one eye, Carrie’s been so brave through everything and truly is the world’s best mum.”

Over the next few weeks Carrie brought all five kittens up as one family. Once they were old enough, the kittens were able to leave their mum, and were neutered, vaccinated, microchipped and given a final health check by the Vet Team, before they were ready to find new homes.

Once Carrie’s kittens had flown the nest, the Vet Team were finally able to properly attend to her health needs and treat her eye. Whilst Carrie had been nursing, the Vets had tried giving her topical treatment and anti-inflammatories, which had had no effect, and sadly had to make the difficult decision to remove her eye.

Mayhew Vet, Dr. Áine Maguire, said, “Unfortunately Carrie’s eye was not responding to treatment, so the kindest thing to do was to remove the eye completely. If we were to leave the infected eye, it’s probable she would have developed Glaucoma, which would have been very painful and uncomfortable.” 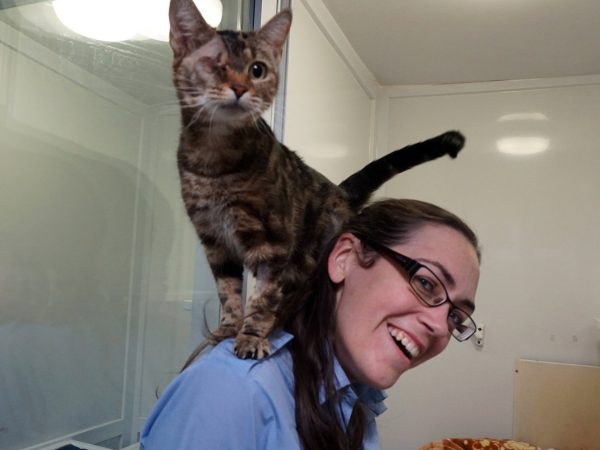 Carrie after her operation

“Carrie recovered from the operation very quickly and living with one eye doesn’t seem to bother her at all, especially since she had lost vision in it before she came into our Home. One eyed cats can still absolutely live happy and fulfilling lives.”

As soon as Carrie recovered and started showing off her friendly and affectionate nature, Carrie found a home in no time. Most of Carrie’s kittens also found their forever homes, apart from little Spiro who is still waiting for that special person to adopt him for a lifetime of love.