Boy Who Was Predicted to Never Walk or Talk Starts School

The average person spends roughly 5 months of their life complaining, but less than 4 months laughing. If you were to reflect on your day so far, how much time did you waste complaining? About the weather, the most proverbial of English complaints, or burnt toast, or traffic on the way to work.

Those complaints fade to insignificance when seen alongside those of Jake Holland. Jake Holland, aged just four, has cystic fibrosis and global development delay, conditions which mean that he spends hours every day being tube fed, undergoing physiotherapy and taking around 50 different types of mediation so that he can successfully digest his food.

Although you would like to think otherwise, the vast majority of people in Jake’s situation would likely feel incredibly sorry for themselves, questioning what it is that they have done to deserve their condition and accomplishing very little in lieu of complaining instead. But young people always have a way of looking on the bright side. 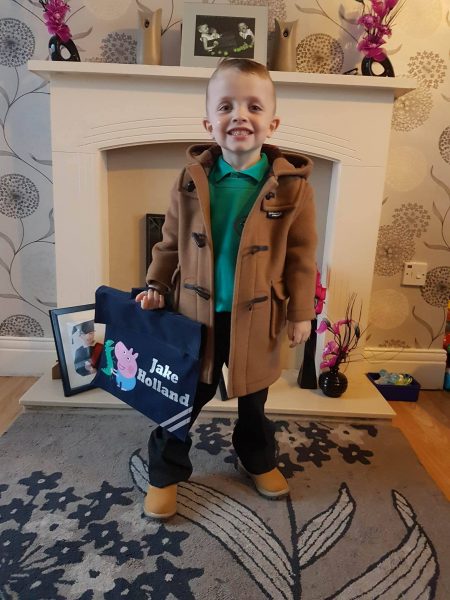 Doctors told his mum he would never walk or talk, but four year old Jake Holland has proven them wrong

Mum, Amanda Holland, was told when Jake was born that he would never be able to walk or talk. Now Jake has just begun to attend reception and is thriving. Amanda says, ‘He absolutely loves school, so much so that some days he just doesn’t want to leave….despite still having lots of health complications, and still spending so much time in hospital, he never lets it get him down.’

Although Jake clearly has a strong and resilient spirit, the support that he received along the way has tremendously aided his recovery and success. Crawford House, one of 10 ‘Homes from Home’ run by The Sick Children’s Trust, allowed Jake’s family to remain by his side throughout his entire period in hospital. The trust aims to ease the worries of both the children and their families by keeping them together during the child’s illness.

The Sick Children’s Trust was founded in 1982 by two paediatric specialists, Dr Jon Pritchard and Professor James Malpas. The work that these two specialists conducted led them to believe that, when children have their parents by their side during hospital treatment, their recovery will be much quicker.

Crawford House is a 23 bedroom accommodation with features such as direct telephone lines to all the children’s wards, communal bathrooms and living rooms, washing facilities and even a playroom for siblings. Furthermore, staff who work at Crawford House are instrumental in offering support and guidance to the families of ill children. Amanda says, ‘When Jake had long spells of treatment at the RVI we were comforted to know we had a ‘Home from Home’ at Crawford House…it has helped my entire family.’

The ‘Homes from Home’ scheme is entirely free for the families of the children, but costs the charity roughly £30 a day to support just one family for one night. This adds up to a total cost of around £100,000 a year. As this money comes entirely from voluntary donations, Gail Stonley, Crawford House Manager, urges people to, ‘get involved and help raise awareness and funds to help continue the running of our ten ‘Homes from Home.’

If you are interested in finding out more about how to support the work that this incredible charity does, visit their website or email them at fundraising@sickchildrenstrust.org.

Next time that you feel the need to complain, remember Jake Holland and the brilliant example he sets. Despite all the odds being against him, everyone that meets Jake can attest to the fact that, he is an enlightening young man. Mum Amanda says, ‘He can do anything he sets his mind to. He’s walking and talking – things he was never expected to do – what could be more inspirational than that?’