500 prosthetic legs donated from the UK to Tanzania

By Kirsten Ehrlich on October 31, 2016 0 Comments
The Muhimbili Orthopaedic Institute in Tanzania receiving the shipment of prosthetic legs. Photo: Legs4Africa

After being delayed for more than a month due to issues with customs and transport, a shipment of 500 recycled prosthetic legs has reached the Muhimbili Orthopaedic Institute in Tanzania. 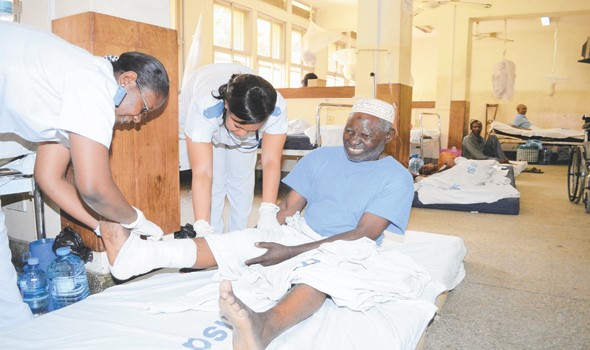 Nurses at the Muhimbili Institute treating a patient injured in a motorcycle accident. Photo: The Citizen

The prosthetic legs were collected from across the UK by the charity Legs4Africa who work to ‘reduce(ing) waste and maximise(ing) lives through intelligent recycling systems.’

Set up only two years ago, Legs4Africa have already reclaimed over 3,000 prosthetic legs from across the UK which would otherwise have been destroyed. They also work to reduce the stigmatism surrounding disabilities, an overwhelmingly prevalent issue in the countries that Legs4Africa work in.

The growing popularity of motorbikes in many African countries have lead to a surge in the number of road accidents occurring every year. In Tanzania alone, there were 50 amputations last year.

The government of Tanzania has found it hard to meet these increasingly high demands, made worse by the fact that the cost of importing the components needed to make artificial limbs has gone up due to fluctuations in currency. The Muhimbili Institute is also struggling to cope with the number of patients referred here from other centres, a common occurence as the Institute is the only tertiary centre for orthopaedics in the country.

Legs4Africa plan to continue expanding the work that they do. Tom Williams, founder of the charity, has set the ambitious aim of shipping, ‘twice as many legs to four times as many countries,’  by next year. In order to meet this target, Legs4Africa are organising a number of fundraising initiatives and volunteer schemes with their next event, a 15 kilometre obstacle run, on October 29th.

To think that people in the countries that Legs4Africa work in are suffering needlessly is heartbreaking, but what is even worse is the fact that this suffering could so easily be negated.  Williams says, ‘A prosthetic leg has a tremendous ability to change a life. Its gives an amputee a chance to stand up, walk again and get back into work.’

To help support the incredible work that Legs4Africa does, please visit their website.