Maisie with her care team at Addenbrookes
Inspirational People

By Kirsten Ehrlich on November 14, 2016 0 Comments
Maisie with her care team at Addenbrookes

It really is exceptional how well young people are not only able to cope, but excel, in difficult situations. Just like young Jake Holland, whose story was recently published on Good News Shared, 11 year old Maisie Loussau has managed to remain optimistic despite her 259 day stay in hospital.

On October 25th, Maisie finally was able to return home, welcomed by more than 50 family and friends. 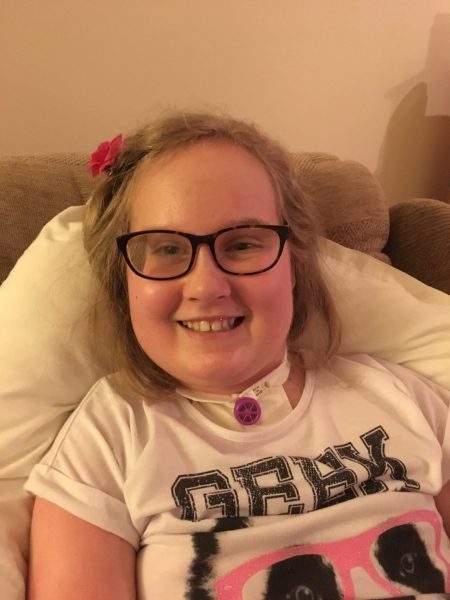 Maisie remains positive and smiling but has a long road ahead of her.

Last year, Maisie began to experience neck pain and double vision. Soon after, her parents noticed that her left eye had begun to turn inward. Initially referred to an optometrist, once she lost movement on the left hand side of her body she was sent to have an MRI scan. The scan revealed that she had a brain tumour, better known to Maisie as ‘Bob the Blob.’

80% of the tumour was removed in a surgery in February of this year, after which Maisie had to be placed into an induced coma for four days. Remarkably, one of the first things that Maisie said to her parents after coming out of the coma was, “As long as I’ve got you two, we can get through.”

Yet Maisie’s journey to recover was not nearly complete. After only 6 months, Maisie suffered from a collapsed lung. This resulted in her having to spend months in the Paediatric Intensive Care Unit (PICU) and then the High Dependency Unit.

Although Maisie has returned home, she still has a long way to go until she recovers completely. The surgery left Maisie temporarily paralysed from the neck down, but she has been regaining strength and now can move both her legs and head. Thanks to a tracheotomy tube, she is able to speak softly, and her eyesight is now back to normal. However, she has lost hearing in her left ear. She faces years of rehabilitation, with the intention of eventually being able to walk again.

Before Maisie fell ill, the family were planning a holiday to Disneyland in Florida. Although it will likely be years before Maisie is able to walk again, she is determined. Her father, Darrell, says, “Her goal has always been to get out of the chair, she believes she can do it. We’re talking years but she’s got sheer determination and I’m sure she’ll do it.”

Throughout the duration of Maisie’s treatment, The Sick Children’s Trust supported her and her parents through their Acorn House accommodation. Dawn says, “We honestly don’t think Maisie would be at the stage she’s at now if we hadn’t been at Acorn House. Because we had a ‘Home from Home’ we could keep Maisie’s spirits up, keep pushing her and encouraging her with her rehabilitation.” 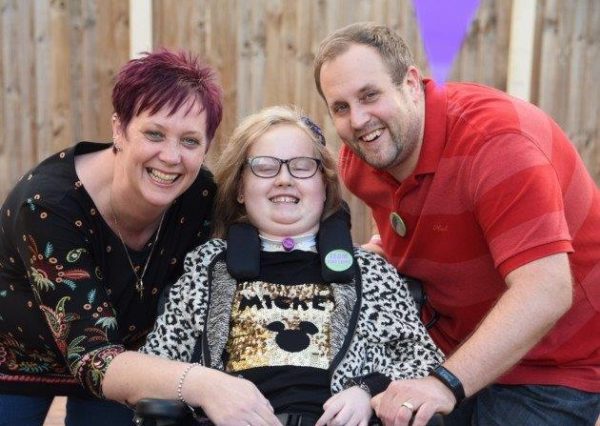 Maisie and her parents are so happy she’s home

“We cannot thank The Sick Children’s Trust Acorn House for being there for us, practically and emotionally. The staff supported us through the tough times and celebrated with us in the good times. They will always be in our thoughts and we will continue to fundraise for them.”

Maisie has been a key supporter for The Sun’s #sweatyselfie campaign, which aims to raise money for brain tumour research. The campaign began shortly after the Sun’s fitness expert, Nicki Waterman, died of a brain tumour. So far £3,000 has been donated to charity, with support also coming from a number of celebrities including Denise Van Outen, Kate Thornton and Emma Bunton.

Perhaps one of the most striking aspects of this story is the speed at which the Lossau’s life changed. Mum, Dawn, said, ‘Our lives changed so quickly. Maisie had always been perfectly healthy and it was as if overnight everything changed.’ Sometimes it takes stories like these to remind people to truly live each day to its fullest. Take a moment today to truly connect with what surrounds you and all that you have to be grateful for, because although it may seem like just another day, you never know how long what you have will last.