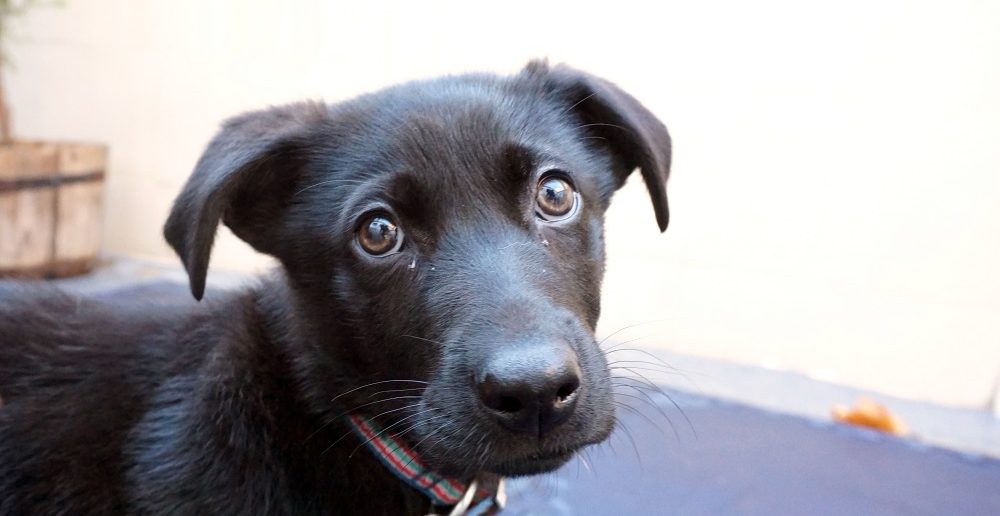 Puppy Bought Online But No Longer Wanted Gets Her Happy Ending

An eight-week-old puppy, who was purchased online as a present, but later no longer wanted, has finally found happiness after receiving love, care, and treatment from The Mayhew Animal Home.

The black Labrador cross, named Madison by The Mayhew staff, had been sold from an online site to a young man who was looking to purchase a puppy for a family member. But when the young man arranged to see Madison at a flat in Amersham, the door was answered by two men who wanted £295 in cash up-front. The puppy’s mother was not present, she had no other siblings around her at the time, and she was terrified and hiding behind the sofa. The buyer was then taken to an ATM machine by the two men and the puppy was handed over with documentation when they received the money.

Unfortunately after buying Madison, it turned out that the family member didn’t want a puppy and the poor little pooch was later taken to The Mayhew. On closer investigation, The Mayhew discovered the microchip and health papers that were given to the buyer by the sellers were false. 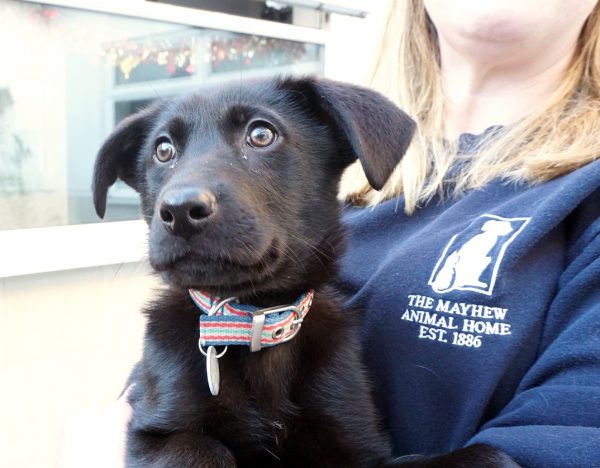 Madison was sold online for £295

The Mayhew’s Head of Animal Welfare, Gillian Notton, said, “There are already so many unwanted animals in rescue centres like ours that have come from people who buy pets on a whim, especially around Christmas time, without taking into consideration the responsibilities and needs of the pet. Unfortunately many people don’t realise that bringing a new animal into their home takes a huge amount of preparation, perseverance and patience.”

“Absolutely anyone over the age of 16 can walk into a pet shop or buy any animal they want online. There are no checks on the reliability and ability of buyers to look after pets and buyers won’t be aware of the pet’s background. We see a lot of unwanted dogs as they are bred purely to be sold for profit or used as a breeding machine. It is completely irresponsible to buy a puppy online, from pet shops or from illegal breeders, but unfortunately we see this happen far too often. Purchasing pets in this way fuels the already huge problem of illegal breeding and unwanted animals and animal charities like ours are left to pick up the pieces.”

“The Mayhew is also a member of the Pet Advertising Advisory Group (PAAG), which aims to ensure that pets advertised for sale are done so legally and ethically. It also aims to raise public awareness of the need to act responsibly when buying pets from websites and publications and the need to do research before making any purchase. We ask that owners think responsibly about where they get their pets from and consider adopting a rescue dog or cat first.”

Madison was checked over by The Mayhew team, who discovered she had worms, which was causing her diarrhoea. Madison was given antibiotics, round-the-clock care and was put on a special diet. 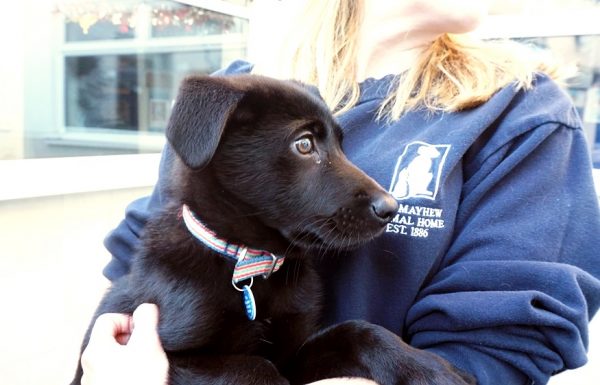 Madison is now happy and healthy thanks to The Mayhew team

The Mayhew’s Head Vet, Dr. Ursula Goetz MRCVS, GP Cert (SAS) CVO, said, “Unfortunately we see a lot of puppies like Madison, who have been sold online and from illegal breeders, and with little care taken over their welfare. Many of these puppies are too young to have been removed from their mothers and haven’t been vaccinated or de-wormed.”

“Responsible owners and breeders would de-worm their puppy at least once and have them vaccinated before selling them. Most veterinary practices also offer a free four-week pet insurance for healthy puppies, so that the new owner doesn’t need to worry about huge vet bills straight away.”

Thankfully, after receiving medical attention and love and care from The Mayhew Kennels staff, Madison is beginning to get back on her paws in no time.

“When getting a new pet you should always consider whether you will be able to look after them correctly, and if you are able to provide them with the Five Welfare Needs including; a suitable environment, need for a suitable diet, need to be able to exhibit normal behaviour patterns, need to be housed with, or apart from, other animals and the need to be protected from pain, injury, disease, and suffering.”

“If you do decide to get a puppy from a breeder, try to get recommendations from owners and breed clubs about reputable breeders. You should always make sure you see the puppy with its mum and litter, checking that they really are the puppies’ family. Responsible breeders should be happy to give you a full medical history of the animal,” Head of Animal Welfare, Gillian Notton, recommends.

Thankfully Madison’s story has a happy ending- she found a loving forever home quickly, winning over her new family with her friendly and affectionate character.