The intention of the founders of Porridge and Rice was to have a positive impact on the lives of the children at their partner schools. Now that the charity has been operational for more than two years, we are starting to see clearly the effect the support is having. 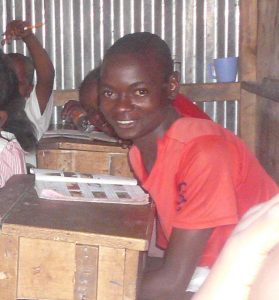 Charles missed a lot of school when he was younger

One of the students who has clearly benefitted from this partnership is Charles Mudavadi. He stands out in Excel Emmanuel (a primary school) for being in his late teens and so is literally head and shoulders above the other children. When the charity first met Charles, he routinely had nothing but a cup of coffee for breakfast and a mandazi (savoury doughnut) for lunch, which meant he was very hungry and unable to concentrate through the school day.

Charles’ parents separated and divorced when he was young, and after the family split, money was very tight. Charles’ father is a casual labourer with no formal skills, who is restricted to just visiting building sites to see whether he can be offered some manual work on a daily basis. The family’s income, therefore, is variable, to say the least, meaning that frequently the family had to get by on fewer than three meals per day.

Payment of school fees for Charles was understandably a problem, and as a consequence he has had to miss a lot of school, not just because he is so hungry he can’t concentrate, but also because he had to work to help support the family. Charles used to pull luggage handcarts (mkokoteni) for a little pay to assist his father in bringing up his other 3 siblings when he didn’t go to school.

The feeding and nutrition programme that Porridge and Rice have introduced at Excel Emmanuel means that Charles is assured of at least two meals each weekday, which consist of balanced nutrition, and enough food for a young man in his late teens. 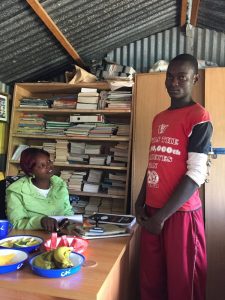 Charles with his school teacher, Mary

The balanced diet means that Charles is now in good health and hasn’t missed a day’s school since the programme was introduced. He used to be known as a truant and have to be sent home frequently due to hunger pangs.

The charity has paid Charles’ school fees, so that the family finances are less stretched, and so that his education isn’t interrupted again. In his final year at Excel, Charles is de facto head boy, and has just sat his KCPE, the Kenyan equivalent of the 11-plus.

While being grateful for all that Porridge and Rice and his teachers have done for him so far, Charles remains ambitious. He plans to attend the secondary school that the charity is setting up, and one day hopes to become an engineer.

The transformation in him is nothing short of a miracle, and clearly demonstrates the difference the feeding programme makes. Charles will hopefully be able to complete his education and rather than having to rely on unskilled work, will be able to go on to seek secure, skilled employment.