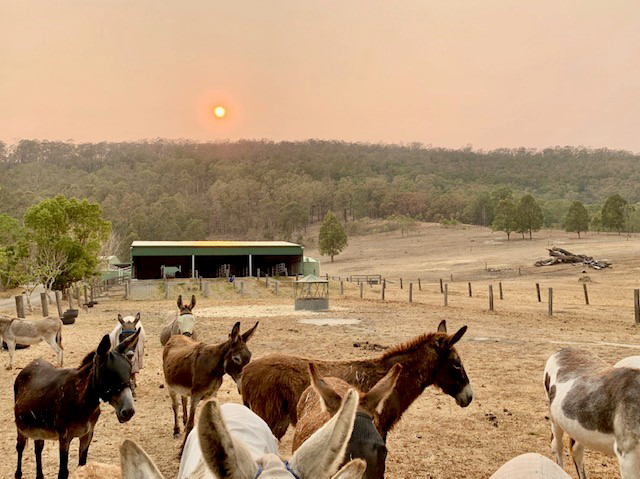 The Good Samaritan Donkey Sanctuary (GSDS) is the largest in Australia, looking after 80 – 150 donkeys at any one time. The sanctuary, located in the Hunter Valley in New South Wales, has been badly affected by the terrible drought that has hit Australia and the ongoing threat of bushfires.

The sanctuary’s last onsite water catchment dam ran dry last week, and it now has to truck in 11,000 litres of water twice a week for the donkeys. Not only do they need water for the animals, they also need spare water to put out fires should one start near them. The last substantial rains at the sanctuary were in September 2018.

The sanctuary is increasingly concerned about the lack of available feed for the donkeys. At this time of year, there is usually no shortage of grazing, or locally available straw. The land is parched and bone dry because of a lack of rain and record temperatures. There is barely a blade of grass for the donkeys to feed on, and other local farms are facing the same challenges, making feed a very high commodity.

The sanctuary has exhausted its stores of barley straw, which were intended as winter stock. Local feed suppliers have had to put a cap on the amount of feed any customer can purchase on the same day, which means the only two members of staff at GSDS now have to make a 300km round trip every day, calling in at three different feed merchants to pick up the donkey’s feed for the following day.

“We are travelling out every day to all our suppliers to get hay and straw for the next days feed,” GSDS farm manager Sandy said. “It’s tiring and we can’t seem to get ahead at the moment, with doing everything else. It’s very stressful here, we are just concerned about feeding, watering the donkeys and taking care of them. We are just coping. The drought has hit us terribly.”

Added to this, some merchants have run out by the time the sanctuary reach them. The feed being sold in NSW is already at a premium, and being sourced from thousands of miles away in Western and South Australia. Demand from commercial farmers is high, supply limited and there is a danger that prices could begin to go up substantially.

The situation now is critical for the sanctuary, and it is still not even half way through its official ‘fire season’.

Fires close to the sanctuary are currently listed as being ‘under control’ but the threat of new fires remains and the danger risk for the Hunter Valley region is still high.

A hundred fires are still burning across the country and although rain and lower temperatures are forecast for later this week, there is an increased risk of thunderstorms, with lightning strikes further increasing the risk of more fires starting.

GSDS is on constant alert for any fires, as it would not only pose a grave danger to their buildings and farm house, but directly to the donkeys. The daily runs for feed, concerns over water and the constant looming threat of fires is putting enormous strain on the sanctuary’s limited resources.

UK-based charity The Donkey Sanctuary has made a £10,000 donation to help GSDS care for the donkeys.

GSDS was founded in 1990 and has a long and close history of association with The Donkey Sanctuary. Dr Svendsen (The Donkey Sanctuary’s founder) met with the GSDS founder Jo-Anne Kokas, when she first started rescuing donkeys, and remained in touch with her all along, giving advice and support as GSDS established itself into Australia’s largest donkey sanctuary.

The Donkey Sanctuary are buying 21 tons of barley straw and funding two weekly water collections until the end of April 2020. The straw delivery will last through to the end of the southern hemisphere summer in April and also protect them from any price rises for feed, ensuring the donkeys have a stable supply through this unprecedented time of natural crisis.

“We have all seen the utterly heart breaking scenes unfolding in Australia for both humans and animals alike over the last few months,” Simon Pope, Tactical Response Lead at The Donkey Sanctuary, said. “It’s only due to the generosity of our supporters that we can play a small part by responding in this way – helping donkeys in their time of need.

“The Good Samaritan Donkey Sanctuary have worked tirelessly, sometimes round the clock, to deal with the effects of this drought and with the threat of bushfires still hanging over them.

“When we learned just how hard it’s been for them to source feed and water for the donkeys in their care and the exhausting but determined efforts they’ve had to go to, we knew we had to help.“