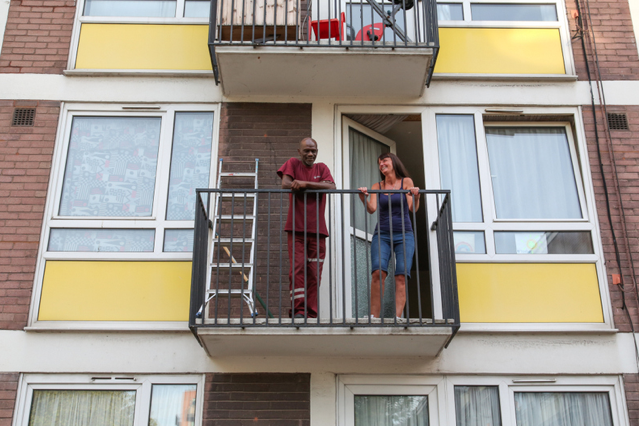 Ruth Corney, an award-winning photographer from Highgate, has embarked upon a new project that captures the unique lockdown experiences of Camden residents.

The collection serves as the basis of Ruth and journalist Dan Carrier’s photo book entitled ‘Two Metres,’ which chronicles the quarantine period from the perspective of locals, food banks, community centres, and charities operating in the neighbourhood.

Ruth has a passion for documentary photography and strives to create art that is distinguished by its social value, serving as a visual commentary on the milieu of a global pandemic.

The proceeds from the publication will be donated to the Alexandra Wylie Tower Foundation (AWTF), a charity that works alongside schools and community groups to combat inner-city poverty and provide extracurricular workshops to stimulate and engage young minds.

The AWTF works in partnership with Islington’s Ringcross Community Centre (RCC), both of which have been prominent players in ameliorating the challenge of food insecurity, which has seen a steep upsurge in the midst of the coronavirus.

“Before lockdown, up to 15 families a day used the RCC food bank. Each week since March, the number of people in crisis coming to the food bank has shot up and now there can be as many as 70 families a day reaching out for assistance,” reported the AWTF.

Ruth felt compelled to set in motion the ‘Two Metres’ project after partaking in an aid scheme organised by the Camden New Journal with the assistance of Dan Carrier.

She initially learnt of the story of a site manager from Brookfield Primary School named Derek Hayden, who spared no effort in cooking meals for vulnerable individuals, and was thus inspired to commemorate the acts of kindness that were continuously and indiscriminately being performed across London.

In order to highlight the unabating community spirit, from March to June Ruth took the photographs of 100 residents from a two metre distance, predominantly based in the Camden and Kentish Town area, although one entry is featured from East London.

Ruth invited each subject to tell their stories of lockdown and to explain how they were coping with its concomitant lifestyle adjustments. The result is an uplifting celebration of the genius loci across London, where, in spite of such troubling times, the overwhelming sense of camaraderie among communities is the prevailing atmosphere.

‘Two Metres’ is available directly from the AWTF at: https://www.awtf.org/ruth