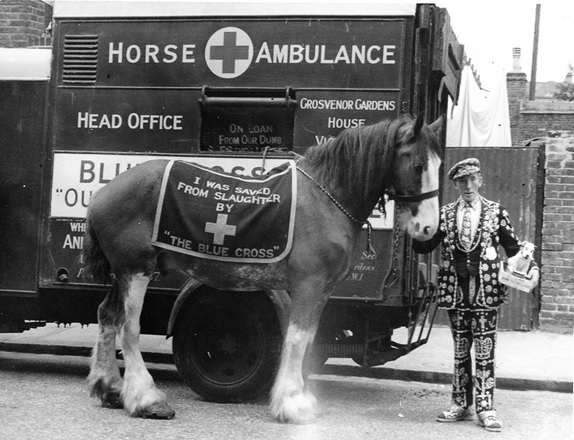 A Pearly King with a horse ‘saved from slaughter’
Amazing Animals

By Nisha Kotecha on May 31, 2022 0 Comments
A Pearly King with a horse ‘saved from slaughter’

The stars stepped back in time to recreate three images from Blue Cross’ heritage, dating all the way back to WWI and WWII, to commemorate 125 years of the charity helping pets and people.

Five of the charity’s modern-day rehoming team also lent their support, recreating an additional archive image that features five ‘kennel maids’ wearing protective army helmets whilst caring for the dogs of WWII soldiers while they were fighting overseas.

Originally known as ‘Our Dumb Friends League’, Blue Cross was formed in 1897 to help the working horses of London who were often underfed, struggled to carry heavy loads and became injured on slippery asphalt roads created for new motor vehicles.

Fast forward to today, and the charity continues to support pets and people through its veterinary, rehoming, pet behaviour, education, and pet bereavement services.

“It was fun to be a part of such a wonderful celebration recreating a special moment between a British soldier and his dog,” said David Harewood. “This campaign not only highlights how long Blue Cross has been around to support pets and people, but also how the love for animals can also span across generations. I’m proud to be involved!”

Since its formation, the charity estimates that it has positively impacted a staggering 38 million lives and it plans to help more than 120,000 pets over the next three years through its services.

“It was great fun being a Pearly King for a day, and a fitting way to acknowledge the heritage of the Blue Cross, and to highlight their wonderful support for horses and other animals that has continued to this day,” Bill Bailey said.

“It was wonderful to have my beautiful dog Kira on set with me to create this image of a WWI nurse treating a wounded dog,” said Lauren Steadman. “Kira is a rescue dog, so I have a huge appreciation for the work that Blue Cross and pet charities do. Happy birthday Blue Cross, and congratulations on your 125th year.”

“Since Blue Cross’ formation in 1897, we have been present for both people and pets during key moments in history, and we continue to support them through our veterinary, rehoming and behavioural services to this very day,” said Iain Heaton, Deputy CEO and CFO at Blue Cross. “But our job is not done, and we are needed today more than ever. So, as well as celebrating our illustrious heritage, we hope that this campaign helps to drive further awareness and understanding of our cause.”