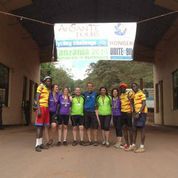 We Started As Strangers, We Finished As Family

Last month, I completed a bike challenge in Tanzania. As part of a group of 11 cyclists from the UK, I cycled 370 km from the base of Mount Kilimanjaro (nearest town Moshi) to Ngongoro Crater. It was one of the best experiences of my life as well as one of the hardest physical challenges. Two things were particularly remarkable, people’s generosity / kindness and the realisation that, without any formal rules or guidelines, as a group of cyclists, aged between 20 and 62, with 6 women and 5 men, there was an underlying, unconscious respect for diversity, with everyone acknowledged, supported, valued and celebrated. There was no specific reference to differences (contrasting with mandatory, conscious policies whereby people feel that they ‘have to/must do diversity’). 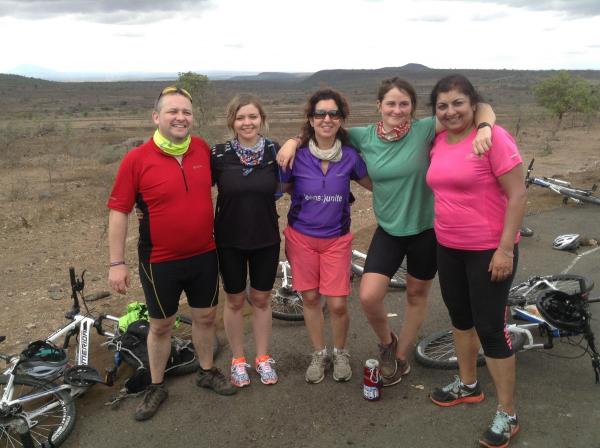 With some of my fellow cyclists (I’m on the right)

My chosen charity was Teens Unite against Cancer, which is based in Broxbourne. I particularly like their philosophy when supporting teenagers with cancer. The charity provides a respite facility and activities enabling teenagers to seek support, share their issues and recognise that they are not alone in their battle against cancer.

I was humbled by the generosity of my family, friends and colleagues in terms of time, money and ideas given by. The anonymous donations were particularly amazing. Everyone recognised the effort that required of me in training and doing the bike challenge and their contribution was an acknowledgement of both the hard work involved and that the money was going to a good cause.

I met the 10 other cyclists at Heathrow. We were all strangers and, during the bike challenge, we were together 24 /7, including sharing rooms in pairs. We stayed in different types of accommodation, a Masai Village hut on one night and small, two person tents on two nights. In addition to the cyclists, there were 12 crew members consisting of a doctor, mechanics, crew cyclists (including a Masai warrior) as well as the catering team. The overall process was managed by the group leader whose leadership qualities, people skills and the fact that he gave his attention to each person were noteworthy and pivotal in setting up a culture where everyone looked out for each other amidst a lot of laughter and jokes.

The bike ride was a challenge in itself and much harder than I expected. We cycled long distances over rough terrain (rocks, stones and sand) as well as on tarmac roads, and over some steep hills. Whilst cycling through the different types of terrain, it became apparent that we all had weaknesses and strengths and of course there were ‘meltdowns’ – tears of frustration, general tiredness and the realisation that cycling continually was exhausting. All cyclists and crew members rallied around and provided tremendous support and on reaching the top of some very steep hills, the loud whoops of delights from everyone echoed into the plains and the Rift Valley. Our will to persevere up the steep hills was inspired by local people cheering us on with ‘pole pole’ (slowly slowly) and the gorgeous children with their delightful shrieks of ‘jambo’ (hello) as we cycled past clad in our bright, lycra clothing. On some occasions, the locals looked at us with frowns or uncertain looks but, as soon as we shouted ‘jambo’, their faces beamed with smiles, more than making up for our physical struggles.

Since returning to UK, I have reflected on my ‘journey’. I realised that cycling became an activity, a focus whereby we spent time with others in the group, making sure everyone was all right and that, through this process, everyone felt valued, respected and included. I am enthralled by the fact that, despite being the only Indian woman in the group, I did not feel that there was a ‘neon arrow’ following me, highlighting or emphasising my differences or adding any concept of stereotypes based on my race or gender. Over time and through mutual respect, we all chose to share our stories of differences, including our personal experiences. The Masai Warrior shared his experiences of killing a lion, a ritual in his culture. He was highly amused by our fascination and curiosity that he had chosen to cycle the distance wearing brown brogue shoes, more noticeable with his cycling shorts. There were nicknames given and, whilst previously I have advocated that nicknames are inappropriate due to possible negative connotations, I recognised that nicknames indicated an intimacy, a bonding ritual and arose from admiration, affection and intimacy. I was given the nickname of ‘Mama Simba’, a respectful term highlighting my determination. It was a fact that I was the slowest cyclist in the group and, like others, I struggled through the challenge. My nickname became a source of recognition, a label of what I am capable of.

At the finish line!

I cried when I cycled past the finishing line, not only because of the Challenge of the bike (with a capital C!), I had tapped into my inner resilience, reminding me of what I can accomplish, through sheer perseverance. I also know that I would not have completed the bike challenge without the support, encouragement and loud cheers from the others in the group. It was heartening that when some cyclist had reached the top of a steep hill they would walk back down half way, wait for me and cheer me on, running with me whilst I continued to cycle to the top.

The bike challenge highlighted and confirmed that the principles of integrity and decency are inherent within us. For each of us such principles offer us a measure of who we are and how we interact with family, with friends, with colleagues, with strangers as well as with ourselves. I felt privileged and honoured to be part of a group that started as strangers, where the qualities of integrity (harmony, honesty, trust) and decency (respect, fairness and compassion) became the underpinning, automatic models of kindness. We finished the bike ride as a family.

Inspired by the Gandhi quote “be the change you want to see in the world”, Sneha has provided training and consultancy support to a wide range of organisations over the past 20 years.