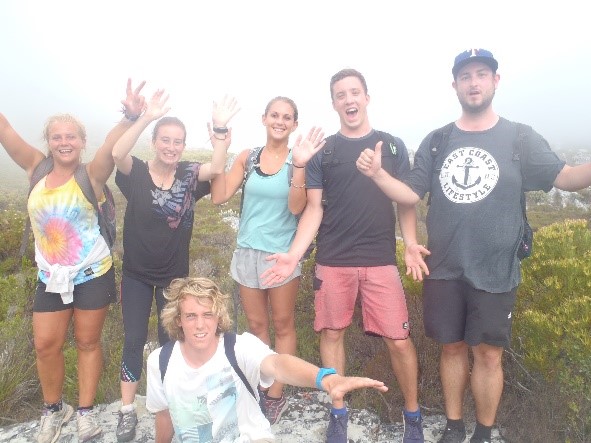 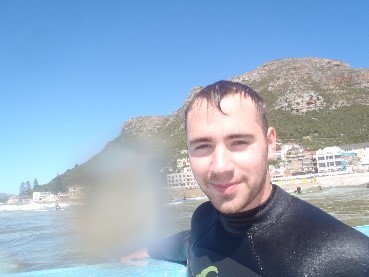 There are few more scenic, sunny, or windy cities in the world as Cape Town. Nestled in the South-West corner or Africa, Cape Town is southerly enough to have the Atlantic Ocean on its West coast suburbs and the Indian Ocean on its South and East coast suburbs. Shark studded though they might be, I have dived and surfed on both sides, and the temperature difference is startling!

It’s in this metropolitan and busy city, that a sense of progress emanates as tourism from Western Europe and the USA particularly pushes development of fast public transport and reliable governmental departments. The most useful quality a tourist used to need to have was patience, but now I think it is adventure and bravery. Crime is down, almost invisible to the normal visitor over a number of months staying here, unless you are I the wrong part of town at the wrong time with the wrong people (but that’s the case with any city).

It is in this backdrop of tourism combined with a real hub of African development and commerce that many businesses are looking to develop links and none with a greater enthusiasm than the Voluntourism sector. It’s a newly developing one, and one which is still finding its feet and its client base. For the most part this sector gives young and old alike the opportunity to see some incredible places whilst making a difference to a local community or indigenous species or area of flora. Whether it’s teaching in an underprivileged school or building solid houses in townships or a Tiger conservation project, these Voluntourism companies are world-wide now and making a difference with a vengeance.

One such company runs their head office out of Cape Town and whilst visiting the city, I had the opportunity to go visit some of the passionate people that help to co-ordinate projects in many countries around the world. Whilst I was there, it was suggested that I visit one of the local projects to get a feel for what the project was achieving and meet the volunteers that gave up their time and money to be there.

It’s at this point I should mention that volunteers have to pay to be there. Accommodation and food are covered by a fairly sizeable fee (eg. £1000 per week) paid to the companies (mostly not-for-profit) which then push most of the money back into their projects. Most of the volunteers are between the ages of 18-22, on gap years before or after university. There are older volunteers on career breaks or on active holidays, but old and young alike, the contribution in financial and physical and chronological terms is large. It can be hard to see where the money really goes when you consider the basic level of accommodation and the lack of finances available to project managers. It gets clearer when you speak with some of the employees of the company, but that’s an issue for another article.

Finances aside, I went to Gordon’s Bay, an hour out of Cape Town and met up with a project manager whose volunteers were centred on some of the sprawling townships that hang off the main area of Cape Town. Fun, education and hope are the three basic amenities most missing from the lives of many of the children in these vast tin sheet camps, and it is these that the volunteers provide by spending one-on-one time helping young children play sport, read and write and enjoy their lives.

The easiest two questions for the volunteers (14 in this project) to answer seemed to be “why are you here” and “what will you miss”. The answer was almost unanimous, “for the kids”. I was expecting at least two or three to say “The sun” or maybe even “ The scenery” but almost every volunteer seemed to have started with enthusiasm and eagerness, and finished by genuinely touching and positively affecting the lives of those with so much less than they.

I had dinner with them in their basic kitchen in a small apartment in a relatively safe area. Bunk beds and a shared bathroom housed 8 of them in (to our standards) cramped companionship. They didn’t seem bothered though, as I had come at quite a particular time. When I had first spoken to the company, they had mentioned that they were planning on doing a charity walk from Cape Point to Table Mountain over 3 days. A quick internet search let me know that this would be almost 60km over ‘fynbos’ low bush and a few good sized hills and small mountains. Fair enough, I thought, a good opportunity for me to see some of Cape Town and the surrounding areas without the bee like in and out of normal tourism. Why not see Cape Town at a walk and have the chance to talk with the volunteers. Bags packed and spirits high, I set off with the volunteers to our starting point at the Lighthouse, warning ships to stay away from Cape Point. 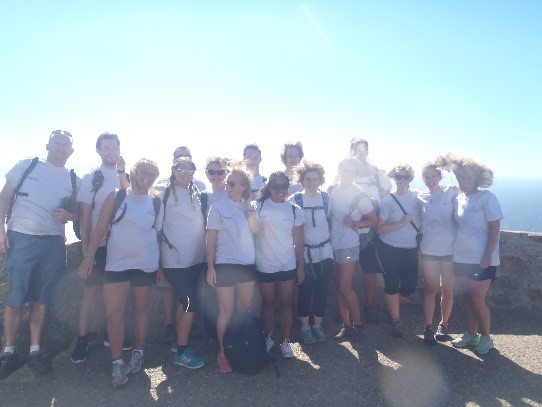 The only thing I forgot is that in mid-November in this part of Africa, it’s definitely summer. Besides the gale force winds that buffeted us as we had a group photo at the start point, the sun on the first day was relentless. As soon as we left the elevated, exposed lighthouse, we were breezeless and baking within minutes. Water was going to be a major issue on this particular walk!

We walked from Cape Point, through the Peninsula National Park and meandered down the coastal road for 20km on the first day. Spirits amongst the volunteers were high and as it was a Friday, talk was of the impending weekend. Who was visiting the local market, who wanted to go see the aquarium? As we made our way to Simon’s Town (famous for its African penguins) I got to know the volunteers better and got an idea of their backgrounds and what had pushed them to come. Some were waiting for university to start, full of excitement and nervousness, wanting to have a special experience before they knuckled down to study. Others had just finished and it was more of a break to assess and ruminate on the best path for the rest of their lives. Several were using it as a respite from a relationship going wrong, a London career become overwhelming. Varying motivations and situations but all just as enthusiastic about the project, if by now a little red-faced and weary. Trudging into the hostel for the first night, the group was a little tired, very hot and spirits a little lowered. However, after a shower, change of clothes and being informed there was a bar seemed to perk them up no end.

If the defining feature of the first day was the heat, the second day was one of hills. Whether they went up or down, we seemed to be keenly avoiding any patch of ground that was on a level footing. A pretty gruelling 13 hour day of 20km’s of ups and downs that saw us progress from Simon’s Town to Constantia, in the heart of the Cape Town vineyards. As second morale slump ended by the discovery of a rooftop ‘braai’ to BBQ on, a supply of after-sun and a sunset to be in awe of. 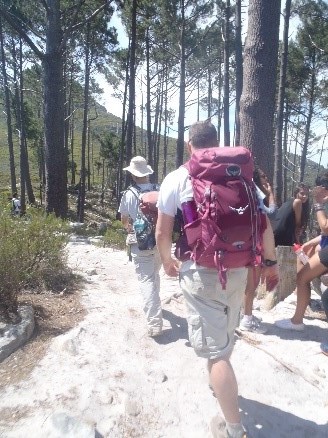 The third and final day was started with a mass of blister plasters, pain killers and moans. But the achievement was getting closer now, tangible to the volunteers who even as we got going towards our eventual target of the famous flat top of Table Mountain, looming in the distance were discussing the children with me. The funny ones, the naughty ones and the angels who they wanted to stay with forever. A final 20km to cover over some roads, some hills and a final ascent of Table Mountain.

As it was my last day with the volunteers I really wanted to find out what they thought about the current explosion of projects like this one all over the world. I wanted to know whether they felt like this was a big holiday, or whether anything was really achieved. The answers were mixed if I’m honest. Some saw it as a personal experience, and the children were slightly incidental to the process. Others saw it as a great chance to see the world and they thought the kids really got something out of it. Others decided it was more pure than that, and that the children really needed and wanted them there, and without them and other volunteers around the globe, humanity would be a sadder place.

I find myself camping with the middle group. Many seemed genuinely engaged with the children and the project. However there was a little too much talk of what movies they were going to see and what they were going to do when they got back. As most only stay between a week and five weeks, there is a constant churn of volunteers, never really getting to know the children before heading back to ‘normal life’.

I believe it’s quite a complex issue, but to make a judgement from my snapshot of project life, the real benefits of the project is the money it injects into both the local economy and the lives of the people involved. The contact between volunteer and child seems too fleeting to ever be really effective and constantly shifting from person to person. The contact with real poverty and difficulty for an 18 year old is important as it gives them a perspective not just coloured by the wealth and prosperity of the Western world and reminds them (hopefully for life) that there are others in the world, and there are not always as well fed or clothed or educated.

The trip was paid for entirely by money raised by the volunteers, their own expenses covered by charitable donations from friends and families. On top of this they managed to raise more than £5000 to push back into the projects and give the children access to books, sports equipment and home improvements.

Joe Thorpe has been working with and alongside community development programmes for several years, experiencing the enthusiasm, passion and good that they do. A keen traveller, he has been lucky enough to see and write about companies and programmes all over the world that are giving people a chance to give back and enrich the lives of others.