Last week I went to the launch of eSolidar, a new website that helps smaller charities by giving their supporters a platform on which to buy, sell and bid on items in order to raise money for their favourite cause.

This is a subject particularly close to my heart given my day job at Lime Green Consulting helping smaller charities to raise more money and stand out from the crowd. There’s no doubt that it’s a tricky time for small charities with so much competition for people’s attention and donations and public trust in charities at an all-time low following all the negative media coverage recently.

Some of the statistics presented by eSolidar founder Marco Barbosa – recently named in Forbes’ list of 30 under-30 Social Entrepreneurs for 2016 – were pretty stark. 90% of fundraising income goes to just 5% of charities, and 80% of charities struggle to raise enough funds to survive. Some predict that the forthcoming Fundraising Preference Service will lead to a £2 billion decrease in fundraising income.

Many small charities can only dedicate very limited resources to fundraising, so the responsibility often falls to over-stretched CEOs and voluntary trustees to come up with creative and innovative fundraising ideas. It’s perhaps unsurprising that small charities can be slow to react to the fast-paced world of technology and the new opportunities that online fundraising can bring. Yet the potential is clear – while only one in eight people donate online each year, eight in ten people shop online.

eSolidar is trying to capitalise on this by providing small charities with an easy way to tap into a potential new source of fundraising and new donors. It gives charities the opportunity to auction items donated to them to an online community of people who care about making the world a better place. Many smaller charities do have supporters who can generously donate valuable items to support their cause, but may lack the time and resources to organise a gala dinner or auction, so eSolidar offers them a great way to still raise valuable funds thanks to their supporters’ efforts.

The launch event featured a testimonial from Radio 1 DJ Gemma Cairney who spoke about her experiences working with eSolidar. Cairney works with The Music Circle, a collective of influential women from the music industry who have a passionate interest in the lives, needs and rights of women across the world. They organise the annual Rumble in the Jumble event which sees celebrities donating personal items for sale during a one-day jumble sale.

Rumble in the Jumble received a very special donation from Paloma Faith in the shape of two huge golden palm trees which formed the backdrop for her 2012 tour. Clearly too large to sell at a jumble sale, Cairney opted to auction them using eSolidar and raised over £1,000, in the process attracted plenty of media coverage for Rumble in the Jumble and the campaigns that they support. 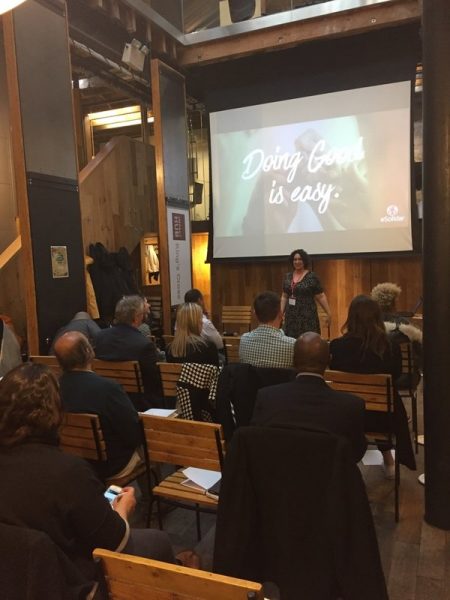 Cairney clearly felt that eSolidar offered a great way to genuinely connect with younger donors. “Capturing younger minds is very important because the younger generation isn’t a selfish one – they want to help but they need to know how,” explained Cairney.

“Young people are used to being told to call a number to donate but they’re not doing it. They like celebrity, they like charity to be wrapped up in fun, and they like it to be accessible. eSolidar felt very contemporary and very right as a partnership. It’s also perfect for allowing us to reach a global audience.”

eSolidar certainly seems to be getting support from celebrities. It has previously auctioned items donated by Cristiano Ronaldo, Katy Perry and Elton John, and is currently auctioning original sheet music autographed by David Bowie and a boxing glove signed by Mike Tyson.

They shared their top online fundraising tips for small charities, including the importance of storytelling to connect supporters to a cause, the need to explain to people how they can actually make a difference to a charity rather than just asking them to donate, and the value of thanking donors in an inspirational way.

As I listened to both the experts and Gemma Cairney’s testimonial, I wondered if maybe the best way to disrupt online fundraising could actually be to make it as undisruptive as possible.

Recent media coverage of fundraising has shown that people are reaching breaking point. Even if they value the importance of supporting good causes, many have grown frustrated with the impact of aggressive telephone and street fundraising on their lives. So any initiative that can persuade people to donate – but through doing things that they like doing rather than by interrupting their daily lives – is surely a good thing, particularly if it captivates younger donors.

eSolidar aims to change charitable giving in the UK in exactly this way, by creating a thriving community of online charity supporters who raise money by bidding on, buying and selling items online and have fun while doing it. Since launching last year, they’ve already raised money for 700 different charities, attracted 40,000 registered users and sold and auctioned 4,000 items for charity.

If they carry on this rate, maybe eSolidar will inspire a revolution in online fundraising. That’s certainly a good news story for all of us!