Although most of us begin the New Year with extensive lists of resolutions, a staggeringly small 9.2% of us actually feel that, by the end of the year, we have accomplished our goals. Club Soda is a new startup helping Londoners in Hackney and the City reverse this trend by creating initiatives to make reducing alcohol consumption a reality, not just an unattainable resolution.

Studies show that increasingly large amounts of people are subscribing to the notion of mindful and moderate drinking, and this is not just for the purpose of adhering to the initiatives of Dry January or Sober October either. 1 in 4 people, the equivalent of 1.5 million Londoners, are taking steps to reduce their alcohol consumption in order to lose weight, save money or become more productive. 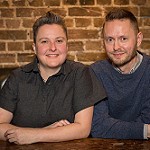 Founders of Club Soda, Laura Willoughby MBE and ex-City banker Jussi Tolvi, are capitalising on this trend by encouraging pubs to increase and broaden their range of low or non-alcoholic beverages. With 4 pubs closing everyday and up to 30% of people in pubs opting not to drink every evening, many pubs have been quick to take up the challenge in order to save their business.

Club Soda’s website, ClubSodaGuide.com, provides readers with a list of 200 pubs and bars across Hackney and the City, rated in terms of the quality and quantity of their non-alcoholic beverages. Readers can also post reviews of the venues and drinks that they have tried, which will be used to compile a list of the top 10 bars in the area, to be released in February

As well as their website, Club Soda organised London’s first ever Mindful Pub Crawl. On the 5th of January, those taking part visited three different venues. The goal of these events is to prove to Londoners that they can go out, socialise and have a good time without feeling obligated to consume alcohol. 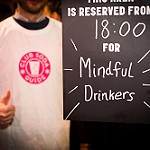 Further dates for Mindful pub crawls have been released, and Club Soda is also trying to encourage people to organise their own Pub Crawls using their #MindfulPubCrawl pack, which contains drink ideas and pub games to support the initiative. They even suggest combining the idea of Mindful Pub Crawls with the Dry January initiative, for example by getting people to sponsor you to visit pubs and not consume any alcohol.

Club Soda co-founder Laura Willoughby says, “We created the Club Soda Guide to help everyone discover good places for mindful drinking. We are so convinced everyone can go to the pub and stay healthy that we are challenging Londoners to use the guide, do a mindful pub crawl and review the best places.”

The guide was developed through a partnership with the London based drug and substance misuse charity, Blenheim CDP, and funded with help from Hackney Council, the City of London, the RSA and the Big Lottery Fund. The councils were quick to support the scheme as they believed it was a good way to diversify London’s social and business scene.

If you find yourself struggling to succeed in your quest to reduce your alcohol consumption, visit Club Soda’s website for inspiration; not only will you and your wallet feel better for it, but Mindful Pub Crawl’s offer the opportunity to meet new people, go to new venues and try new drinks. What could possibly be stopping you?!