Love at First Sight: A Story of Forgiveness, Living in the Now, Unconditional Love, and Seeing Beyond Flaws.

As a self avowed pragmatist, I never believed in “love at first sight.” To me the whole concept was simply the product of fanciful imaginations and romantic lyrics; a way to sell books and mushy music, nothing whatsoever to do with reality. But then, when I wasn’t looking, life threw me a curve ball, and my life was never the same.

Gypsy was a tri-colored mix of unknown origin and, my beloved friend until she passed at the age of fourteen. She was a once in a lifetime friend. When she passed, in my grief, I swore to never have another pet. Ever.

Emily didn’t get the memo. 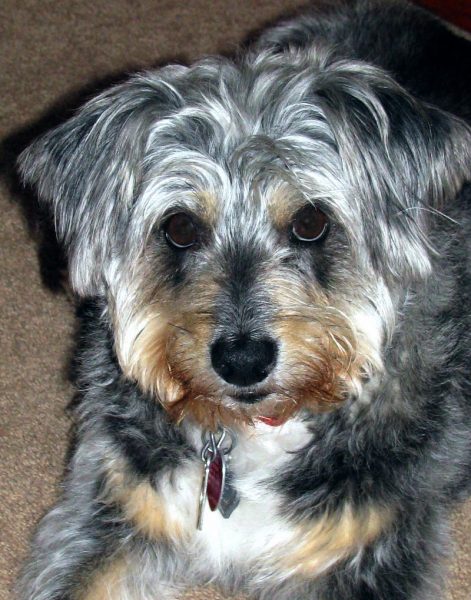 Nagged to frustration, I finally agreed to go to a local shelter just to shut up those who were badgering me incessantly. At the shelter, I quickly dismissed every dog available and stubbornly headed for the parking lot, seething in exasperation. Staggering down the hall, I struggled with crutches needed after a recent surgery, then with the door, but its weight made it impossible to open and remain upright on the crutches. Frustrated, I leaned against the wall, waiting for my companions to join me.

Resentfully I glared at the roiling mass of dogs in the run, flinging themselves frantically at the wire frame; each desperately striving to capture my attention. All but one. A tri-colored dog way in the back, pressed tightly against the wall and in whose eyes, were a mix of desperation and wide eyed fear. The dog was trapped and terrified. Despite myself, glancing around, making sure I was unobserved, I moved a little closer to the cage, my eyes focused on the little dog. As I moved closer all the noise, fear, and then my anger faded away. I saw only two beautiful brown eyes surrounded by a black mask, giving her a sad eyed, panda look.

Anxious to deliver a dog from the shelter to a forever home; an attendant eagerly approached but stubbornly, I shook my head.

“I can’t do it!” I thought to myself. If I adopted another dog, I was simply setting myself up for another heartbreak but as I exited, I made yet another fatal error. Glancing back one more time, I met the dogs gaze and the inevitable happened. I fell in love with those two beautiful, brown eyes.

Against rational thought and my better judgement, with a sigh I asked to see the little black and tan dog with the white blaze on her chest. Pointing, I saw the attendant blanch when her gaze fell upon the wee dog. Babbling, she protested.

Shaking her head, she hurriedly rushed to another employee. Heads together, they conferred briefly then approached the kennel with a catch pole. Snaring the little dog, they pulled her to the gate where they tried to muzzle her but her spastic twisting and desperate attempts to free herself broke my heart. Upon my insistence, (okay, I yelled at them. She was just a little dog, not a man-eater!) They delivered the exhausted dog to an observation room where I pushed my way in. Sitting down quietly in a corner, I watched as the dog paced frantically, finally crouching in a corner as far from me as she could get. Completely spent, she collapsed upon the cool tiles, and watched me with lolling tongue and wide, terrified eyes. Turning out the lights, I quietly left the room to give her the calming darkness and time to recover. Approaching the employees, I asked why the dog was not to be adopted.

“She’s a feral dog, she’s savage!” They babbled in unison

Yes, she was a feral dog, and apparently had never been with people for quite a substantial time or had indeed been wild born. Roaming the countryside, she had scavenged and foraged for food herself and judging by her swollen teats, her pups. It had taken the shelter seven weeks to capture her in a humane cage while never finding the puppies she had obviously been nursing in the wild. Although she was wild, somewhere within her remained a dog that yearned for man, that yearned to serve. I would have bet my bank balance on that. Up to this point, she had probably no memories of man at his best, simply negative interactions given that she had probably tipped her share of garbage cans, stolen the cat food from the barns or patios, in a desperate bid to survive.

When finally trapped, she had made no sound but flung herself, teeth flashing, at all who attempted to touch her. She was a savage dog, and of the opinion that she would get you before you got her. Her limited view of man was one of antagonism and fear. She had been mistakenly placed in with the general population rather than the outside run of the veterinary clinic where she had been scheduled to be euthanized. Cringing in the back, as far away from the other dogs and people as she could get.

My companions finally arrived, prepared to drive me home but against all better judgement, I asked to see the little dog once more. There was just something about those pitiful, frantic eyes…

Over their protests and fears, I re-entered the room and resumed my place in the corner. The dog quickly sat up, her eyes upon me, a mixture of panic and hostility. Quietly, I focused my eyes upon the opposite wall, remaining still while she snarled silently in the corner at my every movement. The minutes passed, and then an hour elapsed, while the little dog maintained her distance. Opening my hand, I reached out, making coaxing, kissing noises. Despite her fear and hostility, she began to cock her head curiously as I clicked my tongue and made every stupid, wheedling noise I could think of. It took time but eventually her curiosity led her to come and carefully, slowly, sniff my open hand. 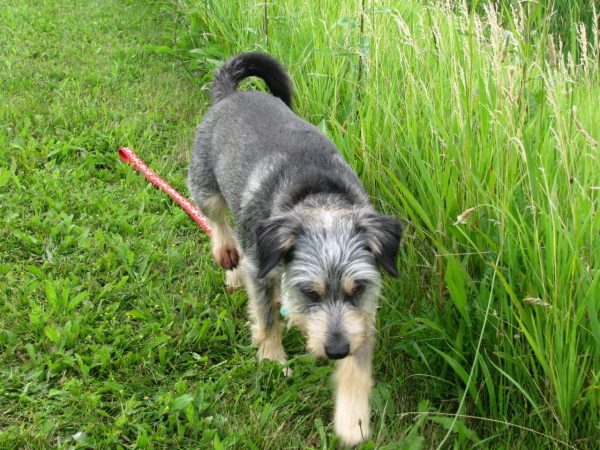 Not daring to move, I allowed her to have a long sniffing examination, remaining still as she carefully and slowly sniffed my arms, my legs and my face. A dogs “sees” through their nose and as I sat quietly, she finished her appraisal, raised her head and finally looked into my eyes. Perhaps it was at that moment that she decided in her doggy mind, to give me a chance. In my heart, at that moment I knew I needed her as much as she needed me. I couldn’t leave my heart behind with this pitiful little dog, for she had stolen it. Talking furiously and the adoption fee later, I rushed to the car as quickly as only the congenitally clumsy can rush on crutches, towing a frightened terrified little dog on a leash, her neck encircled by a collar for the first time.

Returning home, my companions graciously kept their smiles and “I told you so’s” to themselves but had they tried to tease me, I wouldn’t have noticed as I sat beside her. She allowed me to lightly touch her, shrinking and cringing but never showing an ounce of aggression. Inside of her, there was a good dog.

It would be heartwarming but unrealistic to say that I won her trust and love overnight but that would be a lie. The reality was, it took me several weeks to win her over completely and it took two or three months before she began to tolerate people from outside the household. I had to earn her heart and then, her complete trust. She became and is, my shadow, never far from my side.

Initially, she wasn’t a beautiful girl, she was an unkempt mess, her fur patchy, thin and full of burdock’s. Her bones jutted like an anatomy illustration, from a combination of malnutrition and rickets. She wouldn’t have won any awards for beauty but when you saw her beautiful heart reflected in those gorgeous eyes, any flaws that she had fell away.

I named her Emily for her inner beauty and she grew into it, flourishing and blossoming.

Now, at eleven years old she is slowing down a bit but is still my constant and faithful companion, always at my side, and forever in my heart. She has taught me many things in our time together, things like forgiving ones past, living in the now, loving one another unconditionally and seeing each others unique beauty despite any flaws. And from the example of her beginnings, I learned that no matter how badly someone treats you, to heal, you must forgive, move on and hold no grudges. I have learned that beauty is on the inside, reflected in two beautiful brown eyes.

Laurel L. Shannon lives in rural Ohio. She has a formerly feral dog; Emily, and shares custody with her mother of a rescued Australian Terrier named Trixie. After vowing to never have another cat, she is now the guardian of a combined total of four abandoned cats, all four formerly unwed mothers. She hopes to live down the scandal.